Photo of the Queen, Meghan, and Harry (Random Google Image) 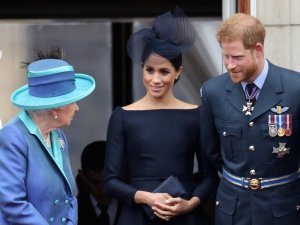 Queen, Meghan with Grandson Harry Pose in historic photograph. We may never see such an image again. (Random Google Image)

Meghan Tells Oprah: I Am Victim of Racism.

We note with interest the contracting of a law firm to investigate allegations of “Bullying” made by allegations against Meghan Markle. There seems to be an attempt to stigmatize Meghan Markle instead of trying to address her concerns, and is instead of trying to make her look as if she is the problem. So Meghan is a complainer and not a genuine victim of systemic racism.

A friend of mine keeps repeating that she thinks Meghan Markle is the problem and not a victim of racist attitudes in the society she married into. Some of us feel that people of a certain class are faultless and can do no wrong.  They are in self denial.  Some of us refuse to accept the fact that there is systematic racism.

Canadian PM Honourable Justin Trudeau expressed the view that systemic racism, for example exist in the Royal Canadian Mounted Police Force (RCMP). This admission was earth shattering. Trudeau must be commended for acknowledging the fact that the Canadian society has a real problem that is deep seated.  Indeed this racial divide is in fact systemic.

This associate of mine who we will call Panchita, not her real name, has expressed the view that Meghan Markle is on a mission to attract attention to herself and she has nothing of real value to complain about.  Are you sorry for her?  She apparently never heard of Adolf Hitler.  Of course, she is not a Jew and may not have heard that Hitler  ordered the round up of Jews who were sent to be exterminated by the hundreds to the gas chambers.

Those palace guards are hell-bent on maintaining the status quo. Who dare Meghan,  a perceived commoner, being let through the door into our circles and now have the temerity to complain about how the system is being run.  Both Meghan and Harry are on the same page as it relates to concerns about the possible shade of their son Archie.  They recall the comments at different time zones, but the common thread in the contents are the same. In the Bible, Luke a doctor had, for example a different account of the same Resurrection story from the other disciples.  They were all correct. Just different perspectives.

“Racism is an affront to decency…

We need to put an end to such an atrocity

Hitler was very wrong, there is no super race

Such thinking is a downright disgrace.

Penned by the undersigned.

Systemic racism exists in the White House and even at Buckingham Palace. In the big house and also the almshouse. Anywhere that people relate to each other. They are likely to demonstrate their racist attitudes.

We note the civil lawsuit that has so far nettled US$27 million dollars settlement for wrongful death of George Floyd. The criminal case is yet to get on the way.  An additional charge of third degree murder has been laid against Derek Chauvin. Jury selection is on the way.

The black Lives Matter movement (BLM) mobilized folks of varying classes and races. They marched and drew attention to the racist tendencies in the north American society, these street demonstrations were beamed across the world and helped to shine the spotlight on negative racist attitudes mainly in those societies. Mini demonstrations were held in France, Canada, Germany and even Jamaica W. I.

What could have led three white Police Officers to attack an unarmed Blackman, pin him helplessly to the ground until he was lifeless? He asked for mercy, but his pleas were ignored.  What could have led police to such brutality?  This was the lowest level of man’s inhumanity to another. It was the suspicion of raw brutality like that, which helped to galvanize the BLM to take to the streets. It was a spontaneous outpouring of revolution by a wide cross-section of the populace both locally and worldwide. The George Floyd incident was captured on video systems so it was difficult to refute these atrocities.  A number of other incidents in similar cases were without concrete evidence. You need a smoking gun to convict a police officer. Juries are inclined to give the benefit of doubt,  if the slightest evidence points thus to the accused, especially if such is a law enforcement officer.

Justice has been murdered for a long time in the United States Of America (USA) in particular. Black unarmed men and some black women have been the victims of

excessive force by likely racist cops disguised as enforcing the laws.  You could label them state sponsored terrorists. This system of injustice has become somewhat systemic. It has hijacked the delivery of street justice. Police engage in profiling and other illegal acts many of a racially motivated nature. The racist attitudes of certain highly placed operatives in the criminal justice system especially in the USA have had a field day. We hope a change is about to happen due to the George Floyd wrongful death saga. The FBI may settle further when their Federal probe ends.

A lawsuit has netted US$27 million as part of a wrongful death settlement so far to the estate of George Floyd.

Hopeton O’Connor-Dennie is a poet & veteran photojournalist who has international exposure with a keen interest in social justice & anti-racism issues.