Rally For Black Music – Protesters Call For A Return Of Reggae, Soca, Gospel 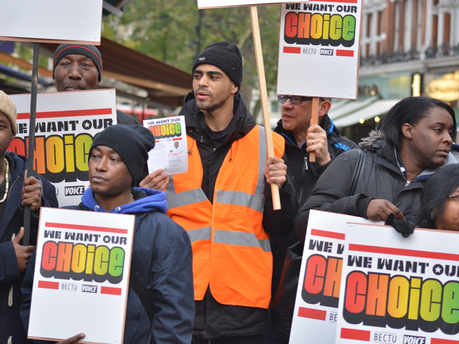 MUSIC LOVERS braved the cold on Saturday, November 30, outside the Global Radio building in Leicester Square to protest the rebranding of the station as Capital XTRA.

Members of the community, holding placards, came out in force to show support for the ‘We Want Our Choice’ of music campaign chanting “What do we want? Choice FM! When do we want it? Now!”

The peaceful demonstration was organised by BECTU, the United Kingdom’s broadcast media and entertainment trade union, and The Voice to protest against the rebranding of Choice FM’s playlist.

Choice FM was renamed Capital XTRA on October 3, and shows playing the kind of music it was known for such as reggae, gospel and soca (required under the terms of the station’s original licence) were dropped.

Campaigner Lee Jasper was on top form. He told the crowd of protestors: “This is disrespect to the black community.”

Global Radio, the company which rebranded the station, has also been criticised for removing the local news segments of Choice.

Radio presenter Kwame, from Galaxy FM, said the rebranding of the station “was institionalised racism.”

He told protestors: “Capital XTRA has disenfranchised black listeners, so, obviously, people are not going to listen anymore.”

Also present was former Choice FM DJ Daddy Ernie, one of the several longstanding presenters axed when the station was rebranded.

He said: “It is 2013, and this is a multicultural city. They told us it’s about money, but at the end of the day, they should still play the music that people love. We’re gonna play some now – maybe some Konshens and Mavado? That’ll get them really nervous.”

He said: “It’s hard to get people to come out into the cold. So really, for every person you see here, there are actually a thousand more black people that support this.”

Among those who addressed the crowd, there were some nostalgic moments.

Recording artist Kimba, 35, said he felt “angry and disappointed” because DJ 279 was the first person to give his music airplay.

He said: “You used to be able to count on DJs to introduce you to new artistes, but radio is not that anymore. A lot of artistes like me knew you could turn to someone like 279 to promote your music. Now, there’s no platform to let you be heard.”

However, DJ 279, who attended the protest and spoke to Radio 4’s Today programme earlier in the day, told The Voice he was not angry with the decision by Global Radio to sack him.

He said: “It was based on money, so, fair enough. But I do think that if you don’t preserve certain aspects of life, then things usually get worse. It’s not just the music. It’s the events, it’s the artistes, it’s the community news, it’s the peace on the streets campaigns, it’s the giving blood campaigns, it’s the sickle cell campaigns, all these things are now gonna struggle.”

She said: “Choice FM won’t be brought back, but it’s what you grew up with, what we all grew up with, and now for the next generation – well, it’s gone for them.”

Anger at the station’s rebranding was further stirred when BECTU diversity officer Janice Turner took to the microphone.

She told the crowd: “The management at Global Radio doesn’t care at all about diversity. All they care about is money. Loads-a-money. They are breaching their legal responsibility to play soca, reggae and gospel, and to bring the black community news that is relevant to them locally. What is Ofcom going to do? Is it going to act in the public interest? Or is it going to do nothing?”

As speakers addressed the crowd, the word “Look!” was muttered by several members of the 50-or-so-strong crowd as the familiar face of Tim Westwood appeared at the window of the Capital Radio building.

The hip-hop DJ recently left the BBC to join Capital XTRA in one of the many controversial changes to the station.

As the protest ended on an optimistic note, the final word came from Winston Philips, chair of the BBC Black and Asian Forum.

He said: “We are all taking notice, and we hope they are listening. This is the first of many events.”

For the original report go to http://jamaica-gleaner.com/gleaner/20131209/ent/ent1.html