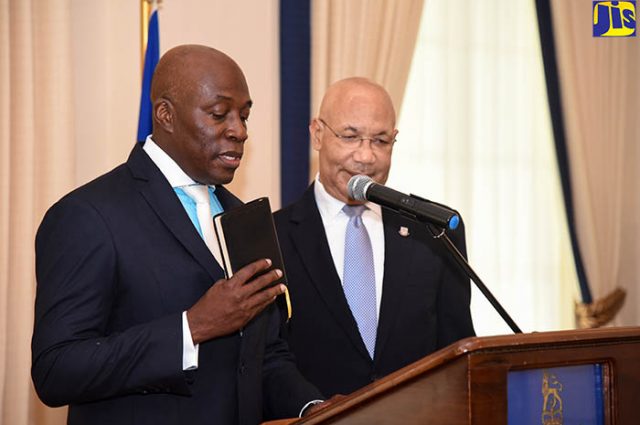 Governor-General, His Excellency the Most Hon. Sir Patrick Allen (right), observes as Hon. Justice Bryan Sykes takes the Oath of Office during a ceremony at King’s House on February 1.

Acting Chief Justice, Bryan Sykes, says the time has come for a re-examination of how resources are requested and allocated within the court system.

He noted that, often, concerns are raised about case backlogs, which evoke calls for increased manpower, but argued that in many instances the solution is to “utilise the existing resources that we have in a more efficient manner”.

“Oftentimes, the cry coming from the courts is that we need more resources, but what kind of resources do we need? Is it human resources, is it material? Is it computers? Is it utilising what we have more efficiently? We have to begin to think now in terms of sometimes moving the cases around in the parishes or within the same parish,” he noted.

“It may be that you have to use the outstations a bit more efficiently. Can we have a physical plant really that is being used once per month or once per week? Is that an efficient use of resources, particularly in the context of a developing country?” he questioned.

Justice Sykes was addressing a workshop on case-flow management for parish court staff at the Jewel Paradise Cove Beach Resort and Spa on Saturday (February 24).

He underscored the need for greater efficiency in the Jamaican court system in order to drive economic growth and development.

“If you look at countries that have developed economically at different points in our history, one of the critical components has always been an efficient legal system,” Citing the example of the United Kingdom (UK) he said the legal system was the vital component that “drove the industrial revolution and made England the financial centre of Europe”.

“It established a reputation for fairness and relative efficiency compared to what was happening in the rest of Europe, and that attracted businessmen and investors from other parts of Europe to have their cases litigated in the courts of England,” he pointed out.

The case-flow management workshop was staged by the Supreme Court. It was facilitated by the International Narcotics and Law Enforcement Section of the United States Embassy, the Justice Undertakings for Social Transformation (JUST) Project, and the Ministry of Justice in collaboration with the Judicial Education Institute of Jamaica.

Case-flow management is a set of principles and techniques that improve processing efficiency in the court system, resulting in less delays and case backlogs. It promotes early court control, and active court management of the progression of cases from initial filing to disposition as well as appeals and enforcement.