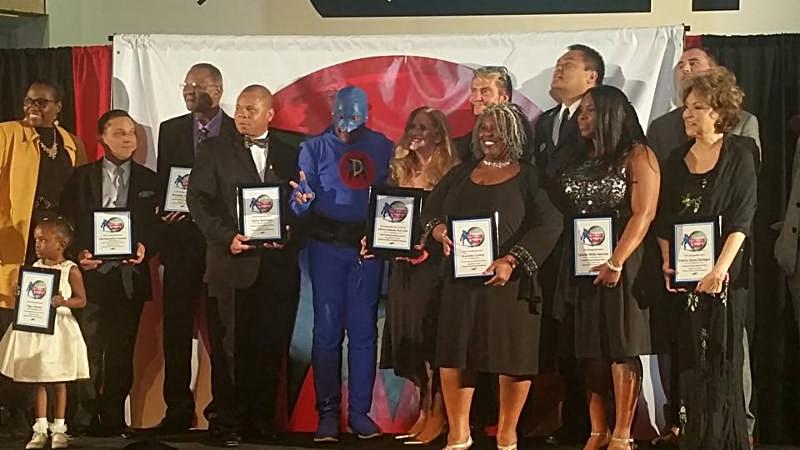 Los Angeles – America’s Real Life Urban Super Hero, DangerMan, will once again honor the heroics of local community activists at the 2nd Annual 2017 DangerMan Hero Awards Show, to be held the evening of Saturday, December 9 at the California African American Museum (CAAM). The highly anticipated event will begin at 6:00 p.m. with a red carpet and VIP reception. Produced byactor, mentor and philanthropist Roger I. Tinsley, the founder of the DangerMan Urban Superhero brand and CEO/President of the DangerMan Education Foundation, Inc., a non-profit 501(c)(3) organization, the gala will recognize eleven “DangerMan Heroes” and one “DangerMan Hero of the Year!” CAAM is located at 600 State Drive in Los Angeles. Tickets are available at https://www.eventbrite.com/e/dangerman-hero-awards-tickets-29359898246 .  The show will also stream live at Facebook at @DangerManUrbanSuperHero .
Actor/comedian Melvin Jackson, Jr. (“The Wire” “Everybody Hates Chris”) will serve as the Master of Ceremony for the evening. Actor/producer Brandon “Lark” Larkins (“Cougar Town” “The Wire”) is among the presenters. Musician JMosley and performing artist Alina Artemova will provide entertainment during the night.
“It takes a team of concerned citizens to keep our city safe,” notes DangerMan, “and as a super hero, I need a super team. Therefore, each year, DangerMan brings the community together for a celebration to extend our appreciation to selected DangerMan Heroes. DangerMan Heroes are ordinary everyday people who give a damn and work very hard to make the world better for others. DangerMan Heroes are People Making California Better.”
The Danger Man Hero Awards consist of an online nomination and voting process. Voting began on November 12 and will end Monday, December 4 at noon. Individuals can vote up to 10 times a day at www.DangerManHeroAwards.com. Each DangerMan Hero will receive a beautiful handcrafted award and a check to help with their journey. The “DangerMan Hero of the Year” winner will also receive a grand prize.
This year’s local champions include Sterling Barbour, VP Veterans Advocacy Group of America; Wendell Blassingame, Skid Row Counselor; Robbie N. Butler, President of the Speak Up Empowerment Foundation, Inc.; Marcia Coppertino, Director of Operations, US Team; Ann Duson, Founder & CEO Women Veterans Utility Group; Tung Nguyen, Life Coach/ Community; Monalisa Okojie, Owner Nehita Fine Jewelry; Raymond Owusu, High School Teacher; John Paizis, Founder & Director Performing Arts Studio West; Robina Suwol, Founder California Safe Schools and Reverend Clarence Eziokwu Washington, Co-Owner and VP We Can Foundation. These DangerMan Heroes are generous and caring people who continue to cheerfully give of their time and resources to make life better for those in need.
Roger Tinsley first introduced DangerMan to America in 1998 after

being emotionally impacted by the death of a four-year-old. The toddler was tragically killed on her birthday by a stray bullet from gang-related gun fire. Tinsley felt compelled to create a real life super hero who could serve as a role model for school age children in under served communities while addressing issues that specifically affected them. Using his own money and resources he created DangerMan, the Urban Super Hero.

As a ‘real life’ urban superhero, DangerMan is an advocate for children’s rights promoting literacy, safety and good health. He wages against bullying and also fights human trafficking. DangerMan visits schools and community events encouraging his audience with a motto of “No gangs, guns, drugs, alcohol or tobacco.” He has traveled throughout America and Haiti, empowering children to live their best life. “Protect, Promote and Provide” are the pillars DangerMan lives by. DangerMan has steadily evolved into the fastest growing super hero brand in the world and will celebrate a 20-year anniversary in 2018.
For sponsorship information and to vote for this year’s nominees for the DangerMan Hero Awards Show go to www.dangermanheroawards.com.
.
For tickets go to https://www.eventbrite.com/e/dangerman-hero-awards-tickets-29359898246 .