Prime Minister, the Most Hon. Andrew Holness (right), congratulates international recording artiste, Sean Paul Henriques, on being awarded the Order of Distinction (Commander Rank) by the Government, this year. He was presented with the award by Governor-General, His Excellency, the Most Hon. Sir Patrick Allen, during Monday’s (October 21) Ceremony of Investiture and Presentation of National Honours and Awards, at King’s House.

Recipients of National Honors and Awards this year have expressed gratitude for the recognition accorded them by the Government for their contributions to the nation.

Notable among the honourees is Minister without Portfolio in the Office of the Prime Minister and Central Clarendon Member of Parliament, Hon. Mike Henry, who is one of five persons conferred with the Order of Jamaica (OJ). 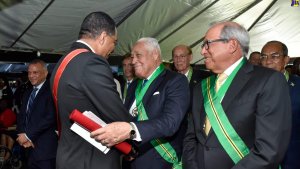 Prime Minister, the Most Hon. Andrew Holness (2nd left), congratulates Minister without Portfolio in the Office of the Prime Minister, Hon. Mike Henry, on being one of five persons conferred with the Order of Jamaica (OJ) by the Government, this year. He was presented with the award by Governor-General, His Excellency, the Most Hon. Sir Patrick Allen, during Monday’s (October 21) Ceremony of Investiture and Presentation of National Honours and Awards, at King’s House. Among those looking on are: Jamaica Broilers Group Chairman, Robert Levy (right,. front row), who was also awarded the OJ; and National Security Minister, Hon. Dr. Horace Chang (right, second row), who was awarded the Order of Distinction (Commander Rank).

The event, which was presided over by Governor-General, His Excellency, the Most Hon. Sir Patrick Allen, and attended by dignitaries and officials, headed by Prime Minister, the Most Hon. Andrew Holness, was one of the main activities commemorating National Heroes Day.

Mr. Henry, who was recognized for 40 years of Distinguished Public Service, Political Representation and Public Policy Development, told JIS News that he felt honoured and will continue to give of himself.

“This award means a lot to me. I will cherish it and build on it as life continues. The important [thing] is that we build on it [as] there are still a number of important things left to do,” he said.

The overall list of recipients was headed by Professor Gerald Cecil Lalor, who was awarded the Order of Merit (OM) for his contribution to Jamaica and the world’s development through the application of Science, Technology and Innovation and Service to the Public and Private Sectors. In his absence, Professor Lalor’s award was collected by his son.

Forty-one persons were awarded with the Order of Distinction in the rank of Commander [CD].

Former United States to Ambassador to Jamaica, Brenda LaGrange Johnson, received an honorary award in recognition for her outstanding philanthropic and humanitarian contribution to Jamaica.

Dr. Chang, who was awarded for distinguished public service in the area of politics, said he was gratified.

“I just want to say thanks to my colleagues… I really appreciate it. After many years of work, it is good to know that my colleagues and the country respect what I do,” he said.

Mrs. Thompson-James told the JIS News that “I have been in the service for many years and I am very pleased that the powers that be saw it fit to give me this award… I am truly humbled”.

Forty persons were awarded with the Order of Distinction in the rank of Officer [OD].

Mr. Campbell, whose announcement was met with deafening applause, said “it is a humbling experience”.

Two Jamaicans, who risked their lives to save others, were awarded the Badge of Honour for Gallantry [BH(G)].

They are: Tamar Delise Blake, who was instrumental in recovering a baby who was stolen from Victoria Jubilee Hospital, and Suzan Foster, who assisted an injured police officer and transported him to the hospital after he was attacked and hit from his motorcycle by criminals.

Speaking with JIS News after collecting her award, Ms. Foster said she felt good about being publicly recognized.

“I was so nervous. But it really feels good to be honored for doing an act of kindness,” the customer service representative said.

Recounting the incident, Ms. Foster said the officer sustained multiple injuries and was bleeding, noting that many of persons on the scene opted to take pictures instead of assisting the helpless cop.

“I realized nobody would [help], so I decided to do so, and my spouse and I took him to the Kingston Public Hospital. He has recovered and is in good health now, and we are happy,” she said.

In light of this, she urges Jamaicans to be their brother’s keepers and think “what would you do if you [were] in a situation [like that], if it was your relative”.

Two members of the Jamaica Defense Force (JDF) were awarded the Medal of Honour for Gallantry.

They are Lance Corporal Ricardo Bennett (Posthumous), who was killed while trying to foil a robbery at a barbershop in Cross Roads, Kingston, in September 2016; and Lance Corporal Ferdinand Trench, who saved the life of a gentleman who fell down a precipice along the Junction main road in St. Mary in August 2011.

Lance Corporal Trench said he was very happy for the recognition, adding that “this award is very important”.

“Over the years, I have been helping people in various capacities; so it is good to be recognized at the highest level,” he said.