Reduction in Overcrowding at Penal Institutions 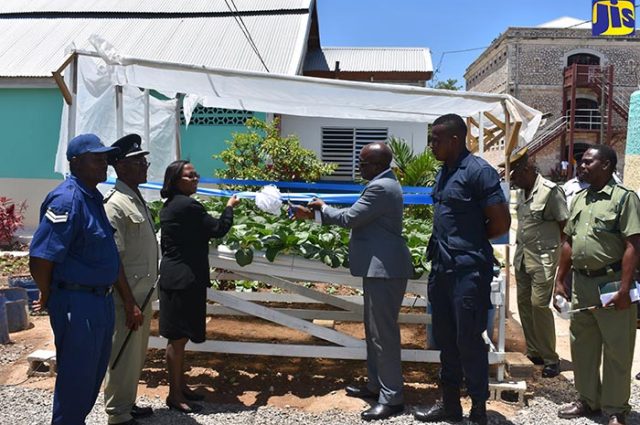 Then Minister of State in the Ministry of National Security, Senator the Hon. Pearnel Charles Jr. (2nd right), and Commissioner of Corrections at the Department of Correctional Services, Ina Hunter (3rd left), cut the ribbon to symbolise the official opening of the hydroponics farm at the St. Catherine Adult Correctional Centre recently. Observing are Correctional Officers at the facility.

The Ministry of National Security is reporting success in the implementation of its inmate reclassification programme, with notable reductions in overcrowded conditions at correctional institutions across the island.

Being managed by the Department of Correctional Services (DCS), the ongoing programme involves shifting low-risk inmates from overcrowded facilities to others that are under capacity.

The objective is to restructure and rationalise the inmate population to ensure greater efficiency in operations, improve conditions for inmates, and strengthen systems of rehabilitation.

Speaking with the JIS News, former State Minister in the Ministry of National Security, Senator the Hon. Pearnel Charles Jr., explains that inmates are evaluated as part of the administrative process to establish whether they are low risk, medium risk or high risk offenders, which plays a key role in determining whether they should be transferred to low, medium or maximum security correctional centres.

He says that most institutions are operating within capacity, such as the St. Catherine Adult Correctional Centre, which is within its ideal population parameters of 850 inmates from a total of 936 inmates in March 2016.

There are others that are under-populated such as Tamarind Farm Adult Correctional Centre in St. Catherine, which has about 200 inmates but has capacity for about 380; Richmond Farm Adult Correctional Centre in St. Mary has capacity for about 250 but has a population of approximately 160; and the Horizon Adult Remand Centre in Kingston has 800 inmates but can accommodate 1,000.

The population at the maximum security Tower Street Adult Correctional Centre in Kingston has been reduced from 1,580 inmates as at January 19, 2017 to 1,453 as at March 8, 2018 and remains the only institution operating above its ideal population parameters.

However, the addition of a new 300-man block at Tamarind Farm, which houses medium-risk offenders, will provide more space for transfers from Tower Street and the St. Catherine Adult Correctional Centre.

“The new block at Tamarind Farm is now complete. The security lights have been installed, bathrooms are ready, and the kitchen is completed as well as the landscaping. The official opening will be announced in short order,” Senator Charles Jr. notes.

Meanwhile, the Ministry is looking to employ the use of electronic monitoring as part of strategies to reduce the inmate population.

Eleven low-risk inmates participated in an Electronic Tagging and Monitoring Pilot Project, where they were able to serve the remainder of their sentences within their communities, while being electronically monitored.

They were placed under the supervision of the DCS and had access to rehabilitation support.

The pilot was conducted to assess the use of electronic monitoring devices for low-risk offenders, and to move towards fully integrating these devices into the custodial process.

“We have made positive strides. With the advent of the use of electronic monitoring, there is even greater opportunity to reduce the burden of overcrowding and promote the success of effective reintegration,” Senator Charles Jr. says.

He is commending the successes to date to the hard-working officers and staff of the DCS.

He notes that the reclassification exercise also helped the DCS to pick up cases that were dormant or unmentioned in court due to lack of representation for the inmates.

For her part, Director of the Inspectorate Unit at the Ministry, Anne Tinglin, tells JIS News that there is a reclassification committee overseeing the rationalisation process, which, in addition to the Inspectorate, comprises Superintendents of the respective institutions, members of the clergy, social workers, and the DCS’ Director of Security.

She explains that the criteria for transfer include inmates’ medical results, whether or not the inmate has been engaged in effective rehabilitation activities which would improve their status from high-risk to low-risk, and their behavioural patterns.

“The inmates that come before the committee are pre-selected by the senior staff of the respective institutions based on specific parameters of suitability for transfer,” she notes.

According to Ms. Tinglin, 83 per cent of all inmates, who were considered for reclassification, were transferred.

She notes that 92 per cent of inmates from the Tower Street facility; 81 per cent from the St. Catherine Adult Correctional Centre; and 71 per cent from Tamarind Farm were given the opportunity to be a part of the exercise.