Reggae For The Global Vinyl Holiday

Record Store Day was conceived in 2007 at a gathering of independent record store owners and employees as a way to celebrate and spread the word about the unique culture surrounding nearly 1,400 independently owned record stores in the US and thousands of similar stores internationally. 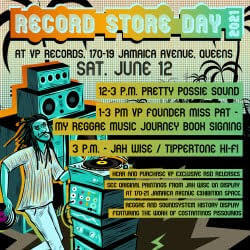 This year on June 12th (Drop 1 of 2), VP’s renovated retail space at 170-19 Jamaica Avenue in Queens, NY will be open to the public to browse hundreds of vinyl titles. Next door at the new exhibition space at 170-21 Jamaica Avenue, visitors can get a copy of Miss Pat’s My Reggae Music Journey autographed from 1-3 p.m., hosted by the V&P Foundation. Pretty Possie Sound will be live in the parking lot and Jah Wise from Jamaica’s iconic Tipper Tone sound will select from 3-5 p.m. Jah Wise’s paintings will be on display in the exhibition space at 170-21 Jamaica Avenue, as well as the work of illustrator Costantinos Pissourios, highlighting the history of the Jamaican soundsystem. In addition to being a storied reggae selector, Jah Wise made a cameo in the 1978 cult classic film Rockers, painting the Lion of Judah on drummer Horsemouth Wallace’s motorbike.

Lee Scratch Perry – Roast Fish, Collie Weed, and Corn Bread. This is a classic 1978 vocal LP from the reggae icon, recorded at the apex of his Black Ark studio, carefully remastered and pressed on colored vinyl, with printed inner sleeve and liner notes from Lee Perry biographer David Katz. The package includes a beautiful Adrian Boot photograph not found in the original.

Wailing Souls – Wailing (Deluxe Edition). This is a much sought-after 1981 Wailing Souls album, produced by Linval Thompson, featuring the gold-standard combo of the Roots Radics band and engineer Scientist, all in their prime. For the occasion of its 40th anniversary, this is the first-time vinyl reissue of this obscure classic. It is expanded in a gatefold sleeve with rare Adrian Boot photos, extensive liner notes from Michael Veal and Carter Van Pelt, included on printed inner sleeves with remastered, deep groove 12-inch mixes from the same period, “Take We Back” and “Take A Taste.” Pressed on white translucent vinyl and VP’s period-specific Jah Guidance labels. This release will not be available until Saturday, July 17, 2021, Record Store Day Drop 2.