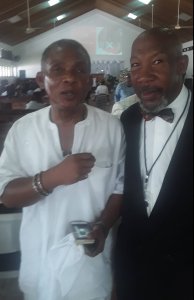 It was a capacity packed Mennonite Church on Whitehall Avenue, St. Andrew, Kingston Jamaica W.I. on Saturday 17th August 2019 when noted Broadcaster,  sought after Master of Ceremonies, and media personality Tony Young  more affectionately referred to as TY was churched.  His internment was held at the Dovecot Memorial Park, St. Catherine.

The congregants included House Speaker Pearnel Charles Snr. who represented the Prime Minister Andrew Holness.  Mr. Charles remembered TY as “a decent and gentle soul”.  He paid tribute to his wife Marlene of 34 years and only son Ramon who are left to mourn a husband and father.  Tony who was 61 had been hailing for some time and had recovered but somehow relapsed and died shortly afterwards. Ms. Carmen Patterson,  Ken Boothe, Dr. Carlene her husband Tommy Cowan, Bongo Hernan noted artistes were all in attendance.  It was a “Who is Who of Jamaican personalities”. 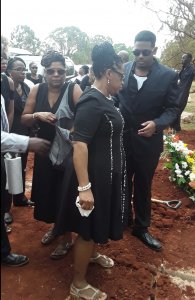 DPP Paula Llewellyn and noted members of the media fraternity including Cordel Green, Executive Director of the Broadcasting Commission. He said ” Tony had a clean sheet, as no adverse reports were lodge against him after 40 years as a media personality “. Green representing the Regulator also asserted that ” I checked the records before coming here today … not one complaint against Mr. Tony Young”  to deafening applause. Ken Boothe said “Tony was my friend and I had to be here”.

Tony young was my colleague and friend.  We enjoyed a three (3) decades of friendship and on a professional level were coworkers at KLAS 89 FM.  He was a broadcaster/ programme manager and I was their National News Reporter.

His wife Marlene of 34 years was “a model of dignity” as grief was obviously written over her face. She was a shining example of courage in the face of adversity. We will long remember her in our prayers.

Gone too soon Tony Young  … you have left indelible footprints on our media landscape and the wider society.