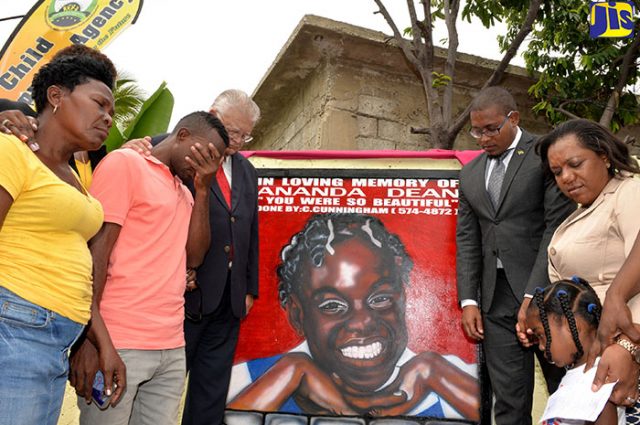 Photo: Member of Parliament for St. Andrew North Central and Minister of Industry, Commerce, Agriculture and Fisheries, Hon. Karl Samuda (third left), comforts Richard Dean (second left), grieving father of abduction victim, Ananda Dean, at the refreshed mural of the young girl on White Hall Avenue, Kingston 8, where Ananda attended a primary school. She was abducted and murdered in 2008. Occasion was a sensitisation session on child protection with members of the Whitehall Avenue community by representatives of several government and child-protection agencies, on May 24. Others (from left) are grandmother of Ananda, Darcy Williams; State Minister of Education, Youth and Information, Hon. Floyd Green; Chief Executive Officer of the Child Development Agency (CDA), Rosalee Gage-Grey and three-year old sister of Ananda, Peyton Dean.

As part of the ongoing public education campaign on child protection, representatives from several ministries and agencies participated in a sensitisation session with residents of Whitehall Avenue, Kingston 8, yesterday (May 24).

Included were the Office of the Children’s Registry (OCR), the Child Development Agency (CDA) and the Jamaica Constabulary Force (JCF). They took part in a walk-through, engaging members of the community on child-protection measures.

The event also featured the unveiling of a refreshed mural of abduction victim, Ananda Dean, who attended a primary school in the community. She was reported missing on September 17, 2008 and was found dead sometime after.

To honour her memory, the national child recovery strategy – the Ananda Alert System – was established, replacing the Red Alert.

It aimed to mobilise the public and private sectors, civil society and communities to work with law enforcement to assist in the speedy and safe recovery of missing children.

State Minister in the Ministry of Education, Youth and Information, Hon. Floyd Green, who spoke at the function, said the artwork honours the memory of the young community member, whose life was tragically cut short, and serves as a reminder that all well-thinking Jamaicans should do their part to protect children.

“It reminds all of us that we have a responsibility to take care of our children. I want to commend the OCR and the CDA for ensuring that the mural is always kept in good condition in memory of her,” the State Minister said.

He pledged the continued support of the Ministry in protecting the nation’s youth, and reminded persons that the updated reporting timeline now allows persons to make a missing-person report before 24 hours have passed.

Meanwhile, Head of the Ananda Alert Secretariat, Nathalie Ferguson, told JIS News that the initiative has been making a significant impact in the recovery of missing children.

Ms. Ferguson noted that at the end of 2016, the number of missing children stood at 265. She anticipates that the work of the Secretariat and the various public education initiatives in the child protection sector will influence a decline in this figure as more children are recovered and reunited with their families.

For his part, Member of Parliament for the area, and Minister of Industry, Commerce, Agriculture and Fisheries, Hon. Karl Samuda, urged adults, particularly men, to show greater respect and care for children.

Father of Ananda Dean, Richard Dean, supported the call by the Minister, and lauded the proactive efforts of government, law enforcement and child-protection agencies in ensuring the safety of children.

“It is great to see the work being done to keep her memory alive and to keep other children safe,” he said.