BRISTOL, Conn., March 28, 2019 /PRNewswire/ — After a two-year hiatus, Doug Glanville is returning to ESPN as a baseball analyst with recurring appearances on “Baseball Tonight,” “SportsCenter,” and other ESPN morning programming. Glanville will continue with his primary role as the baseball insider for the Chicago Cubs on NBC Sports Chicago where he provides color commentary for the Cubs games and analysis on the pre-and post-game show “Baseball Night in Chicago.” Glanville was a 1991 first-round draft pick for the Cubs.

“We welcome back Doug Glanville,” remarks Norby Williamson, ESPN Executive Vice President and Executive Editor, Studio Production. “He will be a versatile asset to our team of baseball analysts for the 2019 season as we reimagine our content, particularly on our iconic ‘Baseball Tonight’ and SportsCenter shows.” 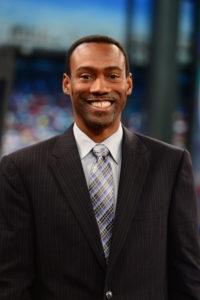 Baseball insider, Doug Glanville adds ESPN to growing list of places he will comment on baseball in 2019 including NBC Sports Chicago, The New York Times, and The Athletic.

In addition to providing analysis for NBC Sports Chicago and ESPN, Glanville will continue to write for the New York Times, The Athletic, and other publications.

“I am excited to come back to the place that was home for so many years,” says Glanville. “I look forward to working with the many colleagues who have supported and inspired me during my time at and away from ESPN. The last two years have been a time of professional growth and reinvention and now a new beginning for both of us. I return to ESPN with a renewed purpose and a stronger commitment to celebrating the power of sports and its role in the world.”

Since leaving ESPN in April 2017, Glanville has reached into the community to raise awareness about inequities in our society. He has used sports to engage and ignite students about the voice of athletes at the intersection of sports and culture in ways that unpack the many issues and complexities of our dynamic political environment. An advocate for equity in our diverse society, Glanville introduced his popular class at his alma mater, the University of Pennsylvania’s Annenberg School for Communication, and he is currently teaching an undergraduate political science and communications class titled  “Athletes, Activism, Public Policy, and the Media” at Yale University. Both courses bring together Glanville’s connections to sports, broadcasting, writing, and motivational speaking to examine the current relationship between sports, celebrity, and the power to communicate for social justice and policy change.

“Sports has long been a vehicle for social change,” explains Glanville. “I have become acutely aware of how the role of sports in our lives has been dramatically shifting while blurring the lines between where sports start and where they end. Helping students to see the influence they can have in our society by collaboratively communicating and engaging to make a difference in their world has been a dream come true for me.”