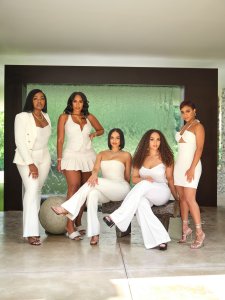 Produced and presented by REVOLT Media, Black Girl Stuff is hosted by four exceptional young women including Demetria Obilor, Brii Renee, Akilah Ffriend and Tori Brixx alongside correspondent Kennedy Rue. Filmed at REVOLT’s Atlanta-based production headquarters, each weekly episode will include round table discussions with exciting guests such as Usher, Ludacris, and more, who will shed light on a variety of important cultural topics. Continuing to build upon REVOLT’s fresh approach to content creation, Black Girl Stuff will premiere on the company’s linear channel and streaming app, alongside a podcast format featuring exclusive social and digital content. Serving its modern audience with original content available in a variety of platforms, this series expands the company’s creative strategy anchored in Hip Hop and powered by creators.

“We are excited to continue amplifying the voices of unapologetic Black women who represent diversity in backgrounds, experiences and perspectives to drive the conversations that matter to Black women globally,” said Detavio Samuels, CEO of REVOLT. “Black women have proven to be the most influential demographic driving culture across categories and Black Girl Stuff provides a platform to explore important topics through their lens in a way that will empower Black women to speak their truth, share their stories and embrace their power.”

Filmed in REVOLT’s Atlanta-based headquarters, Black Girl Stuff was produced by a team of talented Black female creatives who identify with the show’s themes. Thoughtfully created with the company’s young female viewers in mind, each episode will include relevant conversations that connect with Black women from a relatable lens. As part of REVOLT’s ongoing mission to create impactful content, Black Girl Stuff is the result of experienced and creative Black women who authentically relate to the show’s topics and discussions.

“REVOLT focuses on untapped stories relevant within Black culture, and we’re excited to continue carrying out this mission with ‘for us, by us’ content with Black Girl Stuff,” said Monique Chenault, President of REVOLT’s News and Documentary. “We’ve always prioritized putting diverse and creative individuals both in front of and behind the camera. With an incredible lineup of influential Black women along with a talented production team, we’re thrilled to welcome these powerful female co-hosts to the show and look forward to the different perspectives they bring to the table.”

Introducing a well-rounded and all-female cast, each of Black Girl Stuff’s co-hosts will provide unique perspectives to insightfully discuss issues such as pink collar topics, social justice conundrums, relationship issues and more. This new series further expands REVOLT’s ties within the Atlanta community and carries out its mission in creating culture-driven content.

“Black Girl Stuff provides a look behind the curtain of what Black women really discuss within their inner circle,” said Demetria Obilor, Brii Renee, Akilah Ffriend and Tori Brixx, Co-Hosts of Black Girl Stuff. “This talk show is a fresh take on what it’s like navigating our current world from the perspective of the younger generation. We hope these conversations spark much needed dialogue in a powerful yet entertaining way.”