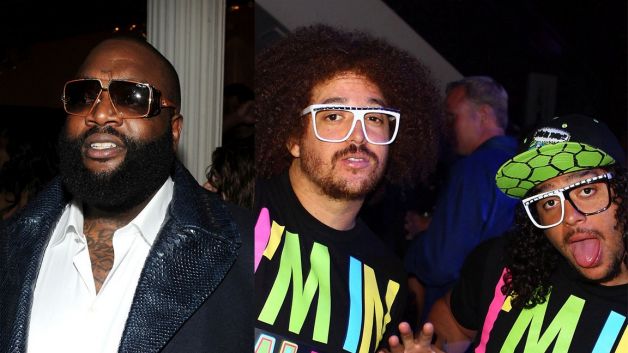 The irony. Rick Ross, aka the mastermind who just won a lawsuit for creatively lifting someone else’s nickname, is now suing a pair of fellow artists for swagger-jacking his 2006 debut, “Hustlin’.”

According to Billboard.com, the suit, filed in Florida court, calls out LMFAO, Kobalt Music Publishing, and Kia Motors America for LMFAO’s 2010 song “Party Rock Anthem,” which contains the line, “every day I’m shufflin’.”

Says Rozay, the L.A.-based electro-pop duo purposely flipped his catchy hook, “every day I’m hustlin'” — even borrowing from the way he said it, with his signature gruff and all — and because of it, have sold millions of copies (7.5 million) and merchandise (the Party Rock Clothing line designed with the phrase emblazoned on T-shirts and such).

Further, it says in the court documents, the duo has been able to license the catchphrase for deals with TV programs, video games, advertisements and airlines.

Rozay wants the maximum ends he can see for that work, an “obvious attempt to capitalize on the fame” of his original song, he claims.

For the original report go to http://www.bet.com/news/music/2014/01/03/rick-ross-sues-lmfao-for-everyday-i-m-shufflin.html