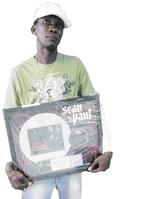 Sheron Rose-Samuels, the wife of slain record producer Patrick ‘Roach’ Samuels, says her husband was a good man. According to the widow, Roach was honest, hard-working, and loved his family.

“Patrick was a great family man. He spoke highly of his mother and how much she meant to him. He told me how she was a mother and a father to him. He would give his mother presents on Father’s Day to make her laugh. He loved her so much. He was a great brother to his one-and-only sister. He always mentioned how close they were. He also talked about his brothers, one that passed on before him and the others that are living,” she told the STAR.

Roach, 46, was shot to death along Mannings Hill Road on September 15.

According to the widow, Roach took his music seriously and dedicated a substantial amount of time to developing his craft, as well as assisting in the development of aspiring artistes. She says Roach went without eating on several occasions because he was directing his focus on breaking barriers with his musical exploits.

“I would ask him hun, when was the last time you had something to eat? He could not remember because it had been that long. He was an honest man and always spoke the truth regardless of the consequences. I respected him for that. We never had a quarrel. He would tell it to me like it is and then we would discuss it like a normal couple and come to a compromise,” Rose-Samuels said.

She said Roach never forgot his humble beginnings, despite moving from the inner city to live in an upscale community.

“He said to me. “Babe, this is where I grew up and these are my people. I can never forget where I came from. Even though I live uptown, my heart is here. They are good people.” Then he would stop in the heart of the community and talk to the people. People would come up to the car and ask him for money. He gave every single one of them,” she said.

“It was my decision to keep our marriage private. I am a very private person when it comes to my personal life, except under these circumstances. People get married every day, they don’t announce it to the public. There are a lot of public figures in our society today and a lot of people don’t know their private life … I want justice for my husband. I want his killer found. I am asking all Jamaican’s, everyone, to pray for justice for Patrick Samuels. Pray for justice, so whoever did this to him, whoever took his life can be brought to justice,” she sent to THE STAR via email.

At the time of his death, Roach was promoting his new collaborative rhythm called the Overtime rhythm which features Mavado’s collaboration Give It To Me with Nicki Minaj. He and his partner Justus Arison had also signed aspiring artistes Byrd Villian and Navino to JA Productions.

For the original report go to http://jamaica-star.com/thestar/20131019/ent/ent1.html