“Stuck With You:” Tammy Townsend and Timon Kyle Durrett to Star in New UMC Original Series from Patricia Cuffie-Jones 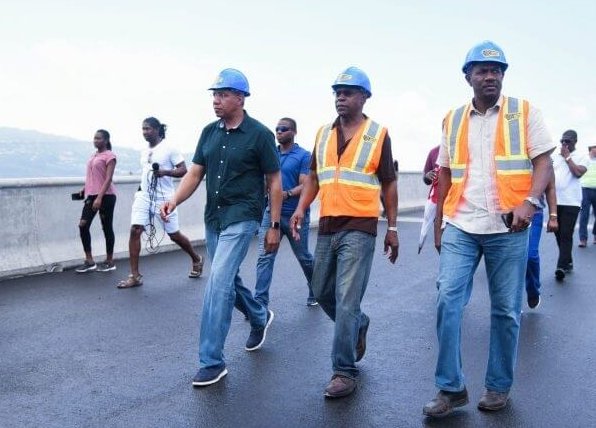 Prime Minister, the Most Hon. Andrew Holness (left foreground), walks along the overpass at Three Miles/Portia Simpson Miller Square in St. Andrew, during a tour of the major road improvement projects in the Corporate Area on Sunday (July 21). He is accompanied by Chief Executive Officer of the National Works Agency (NWA), E.G. Hunter (centre); and Senior Director for Project Implementation at the NWA, Varden Downer.

Prime Minister, the Most Hon. Andrew Holness, says that the major road improvement projects being undertaken across the Corporate Area have the potential to spur new investment and job opportunities.

Citing data from the Statistical Institute of Jamaica (STATIN), which shows that the unemployment rate fell to a new record low of 7.8 per cent at the end of April, he said that the achievement was not by accident, but resulted from the Government’s “very proactive approach in investing in infrastructure”, among other things.

“This is the largest infrastructure project that this country has ever seen. An entire market force has now been unleashed by these developments and you are going to see the transformation happen.

“Very soon, we are going to see people making greater (business) investments – to expand, improve, and new industries taking a keener look at Jamaica. These kinds of infrastructure will actually improve Jamaica’s attractiveness as a place for doing business,” he said, during a tour of the projects on Sunday (July 21).

He noted that the Constant Spring Road improvement in St. Andrew is “a gold mine for development”.

“This development alone has increased property values. It has created massive capital gains, it has given people the opportunity to look at how they can develop the area, and in developing the lands that means more employment, people getting more income, and less people involved in crime,” Mr. Holness said.

He said that the Hagley Park Road project, which includes an overpass at Three Miles, has “significant strategic value”, noting that in addition to improving traffic flow, it will allow for more efficient operation of the Port of Kingston.

Mr. Holness said that while the road construction projects have resulted in some disruption “the gains to come shortly will be beneficial to all”.

He said it is the duty of the Government to make sure that everyone benefits from the developments.

He was accompanied by Permanent Secretary in the Office of the Prime Minister (OPM), Audrey Sewell; Chief Executive Officer of the National Works Agency (NWA), E.G. Hunter and other officials from the agency as well as personnel from China Harbour Engineering Company Limited (CHEC).