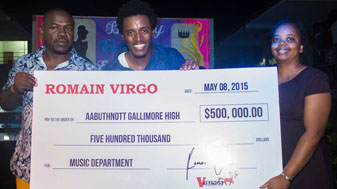 Virgo made the gesture to assist with the acquiring of much needed music and audio equipment for the institution. The donation is valued at $500,000.

“The school gave me the real start in music, and I have always wanted to give back to them. Anything to do with music and to help people to learn, I am willing to assist,” Virgo said. “This donation is more about helping another person become the next Romain Virgo or better.”

Principal of the school, Eloise Panton, was appreciative of the gesture by Virgo.

“I am elated and I feel that the contribution can enhance what we have here at the school. It can help to sharpen the talent that we have at Aabuthnott Gallimore high,” said Panton.

Prior to the presentation, a charity concert was held at the school featuring Romain Virgo and Friends in concert. Performers included Bugle and Loyal Flames.

Virgo, who gained national fame after winning the 2007 Digicel Rising Stars competition, attended the Aabuthnott Gallimore high between 2002 and 2007. He was the lead vocalist for the school choir, which competed and placed second in the 2006 edition of TVJ’s All Together Sing competition.

Virgo also competed and won medals in the Jamaica Culturl Development Commission (JCDC) Festival of Arts prior to launching his solo musical career.

Virgo is known for a growing catalogue of hits which include covers of Adele’s Don’t You Remember, Michael Bolton’s Soul Provider and Sam Smith’s Grammy-winning single Stay With Me. His original hits include Mi Caan Sleep, Rich in Love, I Know Better, Live Mi Life, Wanna Go Home, System and Taking You Home.

His current singles include Star Across the Sky (produced by Sly and Robbie and featured on the Grammy-nominated album The Reggae Power); God Inna Mi Corner (Column rhythm); Fade Away (featuring Agent Sasco and produced by Lifeline Music/Vikings Productions); and Stick by You (Turf Music).

Virgo is managed by Dawin Brown of Vikings Productions. The artistes were backed by the Unit Band and One Drop Roots Band, while sound and music were courtesy of Alternative Music, Bass Odyssey and Intercepter sounds.