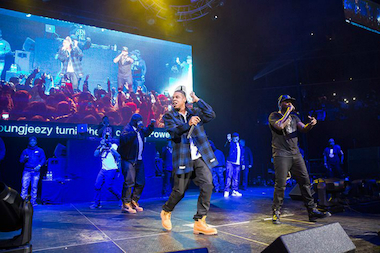 EAST RUTHERFORD, N.J. (AP) _ New Jersey State Police used tear gas last night outside of a major hip-hop concert at MetLife Stadium. Authorities say officers had bottles thrown at them by people in the crowd who were trying to get inside _ some without tickets. Some in crowd at the Hot 97 Summer Jam became upset when the gates were closed and blocked off by police in riot gear. An armoured state police vehicle began blasting a piercing loud noise to try to disburse the crowd and police later used tear gas. The show was headlined by Kendrick Lamar, Trey Song, Big Sean and Chris Brown.