Emerging Dancehall Artiste Rygin King has proven that he has staying power. As one of the Artistes who made a difference with the singles “Tuff”, and “Feel Like This (Big Toe)” in the late 2010s, the Montego Bay based Artiste continues to grow his brand, and his fanbase locally, and internationally. While there are good times to celebrate, the bad times aren’t too far, and he shares his thoughts in the video for his “Inna Mi Mind” single. 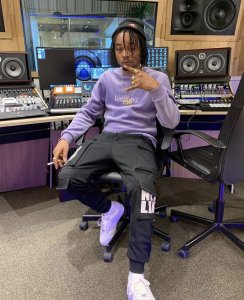 Directed by the acclaimed Terminal 4 Media, Rygin King reflects on some of his various tribulations in the “Inna Mi Mind” video, but is staying strong with the mindset that he is a fighter who will overcome all challenges. The video sees him at multiple locations speaking his mind, with one scene highlighting different times in his life through broken pieces of glass. Having been a survivor of gun violence in 2020, Rygin King has emerged better than ever, with the grace to make the life for himself and others even better.The single was produced by Zukie Records, and released in May 2021. It has enjoyed thousands of streams on music streaming platforms so far, and the music video looks to gradually boost the numbers. A multi-faceted Artiste, “Inna Mi Mind” is one of the more introspective songs from Rygin King, as he has shared that he’ll be releasing more conscious music in the future.

Rygin King’s “Inna Mi Mind” music video is set to be released on Friday, July 16 on his “Rygin King Official” Youtube channel. The “Inna Mi Mind” single is now available on all digital music streaming platforms. To stay up to date with Rygin King, follow him on Instagram and Facebook at @RyginKing.