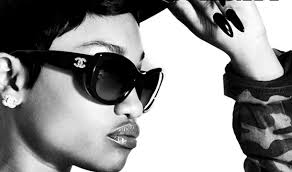 Sensation Sade Serena blasts onto Billboardwith her hit debut single “Tonight,” from Uprize Music/Island Def Jam Digital. The Miami-based, Jamaican-American singer and songwritercontinues to enjoy an explosive rise with the release of “Tonight” and its sizzling video earlier this year. “Tonight” entered at #4 on the Billboard Singles Sales Chart, dated September 7, 2013, with pop super-group One Direction at #1, placing her in very good company. Her follow-up single“Renegade” was released to radio just in time for the Labor Day party weekend and makes its official bow on iTunes and all major digital retailers worldwide on Tuesday, September 10, 2013.

Sade Serena brings a diverse, edgy yet soulful sound to the pop music world and “Tonight” is a club anthem that showcases her range and talent, lacing her butter-soft sultry vocals over a sizzling pop electronica rhythm. It was produced by Abe Stewart for Uprize Music, her management company and label. “It’s definitely a good feeling for Uprize Music and Sade Serena to have a song charting on Billboard,” discloses Richard Myrie, CEO ofUprize Music. “It’s something you work towards and it’s an accomplishment and a beginning at the same time.”

Riding on the success of “Tonight,” Sade Serena has been making the rounds on radio and events to promote her single, across the U.S. all year long. The track has since been remixed by Grammy-nominated producer Mike Rizzo and the “Tonight Remix” is also enjoying rotation across U.S. radio, bringing Sade Serena her first taste of success. “It’s every artist’s dream to have your music get out there and be accepted,” she reveals. “This Billboard Sales Chart shows there is a demand for my music and it’s even more amazing to have my very first single be included with the likes of One Direction.”

“Tonight” is now available worldwide on iTunes and all major digital retailers from Island Def Jam Digital Distribution/Uprize Music and“Renegade” will be available on Tuesday, September 10, 2013. FollowSade Serena at www.facebook.com/sadeserena or twitter.com/sadeserena. Please direct all management and media inquiries to Richard Myrie of Uprize Music at uprizemusic@gmail.com.