First Born (Lnj) – Out There 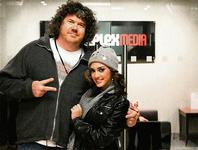 The tour began with Samantha J making stops in urban areas such as Tampa Bay, Miami, Charlotte, Virginia Beach, Richmond and Washington DC. In these cities, she had sit-downs with the disc jocks and programme directors of major Top 40 radio stations, including 95.7 the Beat, WPEG Power 98, WJHM 102 Jamz, and the iconic WPGC radio station in Washington DC.

In Washington DC, Samantha J and her tourmate Andrea Russett drew a crowd of over 2,000 fans at a meet and greet. Other meet and greets for the two in Boston and downtown Philadelphia’s Love Park saw more than 800 persons attending, with media coverage by NBC and other press in the latter city.

The meet and greet in Boston was a spontaneous one, as it occurred after Samantha J performed in the I Heart studios at Clear Channel Boston for KISS 108 and WJMN Boston. The fans had gathered outside of the radio stations’ offices upon knowing that Samantha J would be present there.

At WRDW/WIRED 96.5, a local Philadelphia radio station, she did a lounge performance for the station’s staff and was interviewed by radio personality Buster.

New York City (NYC) was a major date for Samantha J’s promotional tour, as she did interviews for the iconic Complex Magazine and TV, as well as the Caribbean Diaspora favourite Large Up. She also met with and performed for both MTV and BET executives, respectively, regarding future projects between her and the television networks.

In New York, Samantha J performed a private acoustic set for Geespin, the influential programme director of POWER 105 in NYC. POWER 105 is one of the leading radio stations in the entire city, and has supported Samantha J’s single Tight Skirt from the onset.

Speaking on the metrics of Samantha J’s international presence with Tight Skirt, Gary Bernstein of Oceanic Tradewinds noted that, “Currently, over 50 radio stations in the US are playing Tight Skirt, reaching an audience so far of over 2 million people. Some leading US radio stations playing Tight Skirt are HOT 97 New York, POWER 105 New York, WJMN Boston, WPGC Wash/DC, WRDW Philadelphia, and WEDR Miami, just to name a few. This is in addition to video play on MTV, BET, and many other video outlets.”

During Samantha J’s tour, Tight Skirt was added to channels on Sirius XM, as well as Music Choice. Music Choice is in 48 million households across the US.

“Also, VH-1 aired Tight Skirt on the debut episode of this season’s popular Chrissy and Mr Jones television series, with voting for the song occurring on BET, via the 106 and Park mobile application.”

Persons can watch some of the interviews that Samantha J conducted overseas at the websites for Philadelphia’s WRDW/WIRED 96.5, Boston’s KISS 108 and WJMN radio stations, respectively.

For the original report go to http://jamaica-star.com/thestar/20131116/ent/ent2.html