NEPA to Partner With UDC for Coastal Clean-Up Day Sept. 16 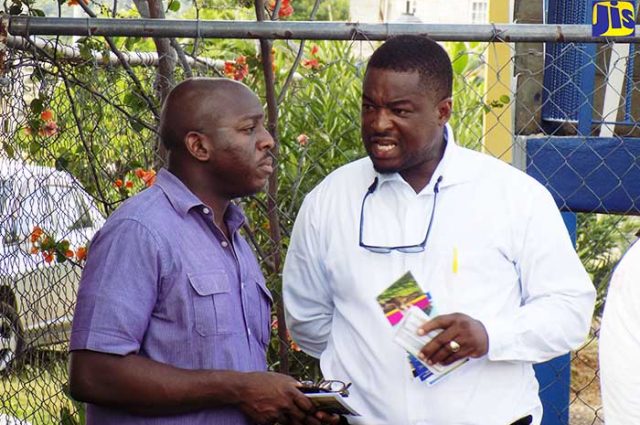 State Minister in the Ministry of National Security, Senator the Hon. Pearnel Charles Jr. (left), listens keenly to Member of Parliament for Central St. James, Heroy Clarke, during the Zone of Special Operations (ZOSO) community services fair held at the Mount Salem Primary School in Montego Bay, St. James. The two-day fair was held on September 9 and 10 and was attended by hundreds of residents of the community.

State Minister in the Ministry of National Security, Senator the Hon. Pearnel Charles, Jr, says he is pleased with the support given to the Zone of Special Operations (ZOSO) community services fair in Mount Salem, St. James, by residents, state agencies and corporate partners.

In an interview with JIS News at the fair on September 9, the State Minister said the support reflects strong backing for the decision to declare Mount Salem the country’s first Zone of Special Operations, and also what can be done through cooperation at all levels.

“The support is a demonstration of ‘joined up government’ and is exactly what was promised to the community. You have JSIF, CDA, HEART, Members of Parliament from the parish and persons from the Opposition. This is what we want…for Jamaicans to feel they are all participants in developing this community. I am so encouraged by the response,” he said.

Senator Charles Jr. noted that in his interaction with citizens from the community, they have indicated an acceptance of, and support for ZOSO, and have committed to work with members of the security forces in transforming the area into a place of peace and happiness.

“They have indicated that they are participants in the process and they are willing to work with members of the Jamaica Defence Force, the Jamaica Constabulary Force and the members of the administration to ensure the success of this operation,” he added.

The State Minister pointed out that following a careful analysis of the activities over the two days of the fair, decisions will be taken as to the way forward in maintaining and even increasing the number of social programmes for the citizens of Mount Salem.

It is important, Senator Charles Jr. said, for these programmes to continue, not only in Mount Salem, but right across the island where the need is evident.

He said discussions have been on-going with the various state agencies, with a view to providing opportunities for the citizens and that efforts will be made to ramp up the pace at which the services are offered.

The residents also got free medical and dental services, while the children were provided with recreational activities.

Mount Salem was on September 1 declared the first Zone of Special Operations under the Law Reform (Zones of Special Operations) (Special Security and Community Development Measures) Act, which seeks to contain crime while safeguarding the human rights of residents and promoting community development through social-intervention initiatives.