Jamaica Partners with the UN to Launch Campaign against Human Trafficking 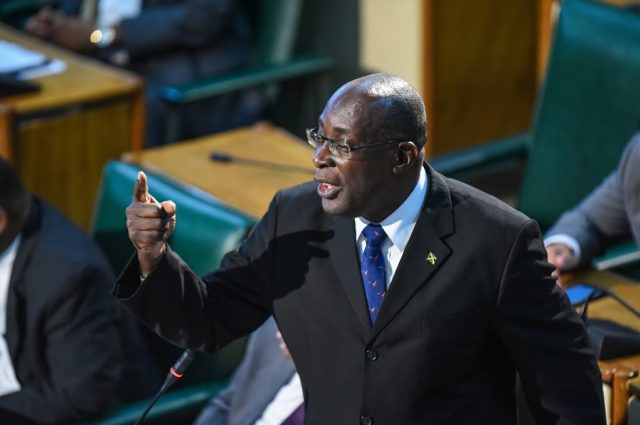 Minister of Education, Youth and Information, Senator Hon. Ruel Reid addressing the sitting on the Senate on March 23.

The Government now has the authority to spend funds allotted in the 2018/19 Estimates of Expenditure, following the passage of the Appropriation Act 2018 in the Upper House on March 23.

This annual Bill provides authority for expenditure (other than statutory expenditure) for the financial year (FY) 2018/19 and specifies the manner in which the money is to be allocated to the various services and purposes of the Government.

The Bill, was approved following a six-hour-long debate in the Senate, with 11 persons making contributions. The new fiscal year begins on April 1.

Piloting the legislation, Minister of Education, Youth and Information, Senator the Hon. Ruel Reid noted “this is a prosperity Budget for the people of Jamaica.”

“The budget for the 2018/2019 FY is smaller, and for this reason, we are able to reduce our debt to Gross Domestic Product (GDP) ratio and can declare no new taxes! This will allow the private sector to invest more in the economy, and to become the engine of growth,” he said.

Senator Reid stated that the Government is balancing the books, while balancing peoples’ lives.

“We are creating jobs and wealth for the population; we are creating opportunities for all persons and striving to build the foundation on which to achieve a prosperous, productive and equitable society,” he said.

Senator Reid said for the financial year 2018/19, the Central Government expenditure is programmed at a total of $807.1 billion. He said of this sum $773.7 billion will be funded from the Consolidated Fund and another $33.4 billion from Appropriations-in-Aid.

“Of that Consolidated Fund, the Public Debt Service amounts to $289 billion- which is $89 billion less than what was spent on debt servicing for the last fiscal year,” he said.

“Our good fiscal management has allowed the government to take even better care of the country, as we have been able to increase our non-debt spending by $58.1 billion, coming from the Consolidated Fund,” he said.

The Bill was approved in the House of Representatives on March 21, following the close of the Budget Debate.