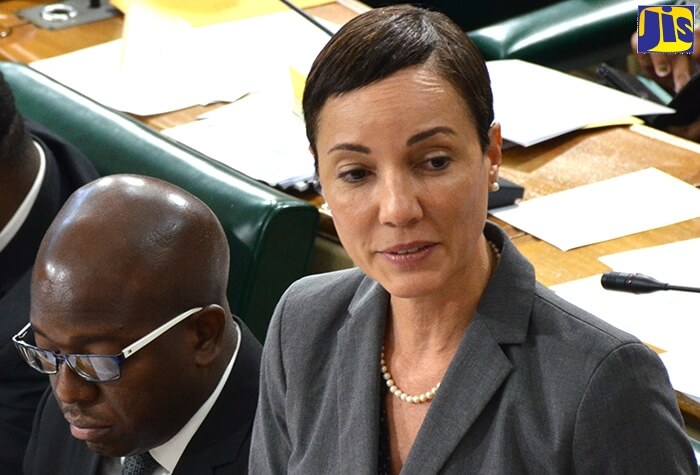 Minister of Foreign Affairs and Foreign Trade, Senator the Hon. Kamina Johnson Smith, who is also the Leader of Government Business in the Senate, leads debate on the Law Reform (Amendment of Penalties Act), in the Upper House on Friday (September 13).

The Senate, on Friday (September 13), approved the Law Reform (Amendment of Penalties Act), which will update low outdated monetary fines for a range of offences.

Leader of Government Business in the Senate, Senator the Hon. Kamina Johnson Smith, said the amendments will ensure that fines are more in keeping with the gravity of offences and that Jamaica is regarded as a “just and law-abiding society”, with an accessible, efficient and “fair justice system for all”.

She said that updating old penalties in laws will “form part of the Government’s commitment to restoring confidence in the justice system”.

For her part, Senator Sapphire Longmore said the move to update fines is welcomed, and will provide greater protection for vulnerable groups.

She noted, for example, that under Section 40 of the Offences against the Person Act, and the Subsection dealing with Aggravated Assault against Women and Children, the fines have moved from $2,000 to $500,000.

She noted further that with the amendments, the fine for persons found guilty of stealing certain farm products will increase from a maximum of $20,000 to $250,000.

“This is clearly a more significant deterrent to such emotionally and economically damaging crime,” she pointed out.