Minister Grange Statement on the Commemoration of Bogle and Gordon Anniversary 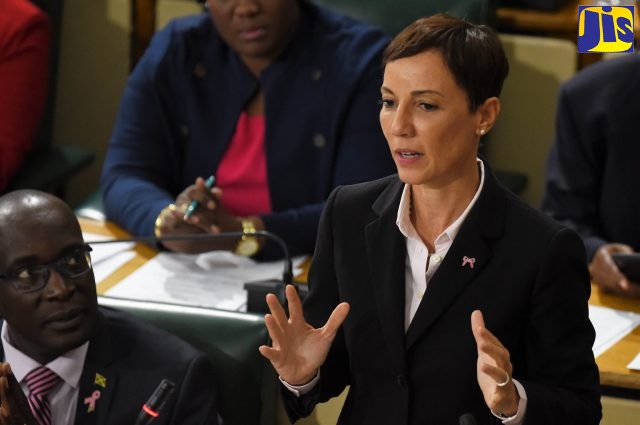 The Senate on Friday (October 19) approved the Emergency Powers (Continuance) (No.4) Resolution 2018, which will extend the State of Public Emergency (SOE) in the parish of St. James until January 31, 2019.

Seventeen members of the Senate voted in favour of the Motion. There was one abstention, while three members were absent.

In her remarks, Leader of Government Business in the Senate and Minister of Foreign Affairs and Foreign Trade,  Senator the Hon. Kamina Johnson Smith, noted that the extension seeks to secure the gains made and ensure their sustainability.

Mrs. Johnson Smith noted that between January 1, 2018, when the SOE was declared, and October 15, 2018, the St. James Police Division accounted for 79 murders and 88 shooting incidents.

This represents a 67. 2 per cent decline in murders and a 53.4 per cent reduction in shootings when compared to the similar period in 2017.

She noted that in 2017, the percentage of cases cleared out of the reported cases of murder was approximately 31.7 per cent, and in 2018 as at October 12, approximately 70 per cent of cases have been cleared.

“Not only is the murder rate down significantly in St. James but the clearance rate has doubled, and the significance of this should not be understated,” Mrs. Johnson Smith said.

“When we speak of disruption of the gangs, even without naming them or naming the persons who have been charged or arrested, the numbers and the sheer decline speak for themselves,” she added.

She noted, too, that the clearance rate of reported serious crimes has increased from approximately 39 per cent to 62 per cent. “This can only be described as an unmitigated success,” she said.

Mrs. Johnson Smith said the residents of St. James are experiencing an improved quality of life. “The fear factor has been reduced,” she said, adding that public order is returning.

Senator Johnson Smith noted, as well, that the tourism sector is flourishing and will continue to provide legitimate employment for the residents of the parish.

“The security forces have been doing an excellent job. All of the crime initiatives in the world could never be successful without the hard work and commitment of our policemen and -women and our soldiers, both on the ground and at the strategic level,” she said.

She also noted that the improvement in the clearance rate is indicative of the improved trust between citizens and the police.

During the SOE, the security forces will have the power to search, curtail operating hours of business, restrict access to places and detain persons without a warrant.

It also gives them the power to stop and question persons, seize property, and control public gatherings and movements.

The Constitution provides that a period of public emergency can be declared by Proclamation if the Governor-General is satisfied that action has been taken or is immediately threatened by any person or body of persons of such a nature and on so extensive a scale as to be likely to endanger public safety.

The Emergency Powers Act refers to the existence of a State of Public Emergency and empowers the Governor-General to make regulations during a period of public emergency.