Government Working to Take Profit Out of Crime 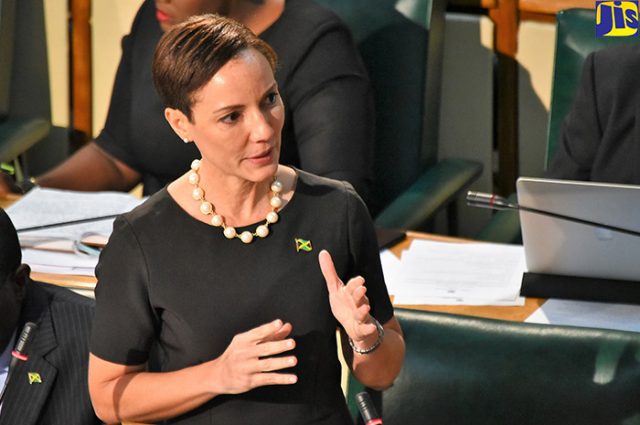 Leader of Government Business in the Senate, and Minister of Foreign Affairs and Foreign Trade, Senator the Hon. Kamina Johnson Smith, addresses today’s (February 1) sitting of the Senate.

Members of the Senate today (February 1) approved the Emergency Powers (Continuance) Resolution 2018, which will extend the State of Public Emergency in St. James until May 2, 2018.

All 15 members of the Senate who were present voted unanimously in favour of the motion. Six members were absent.

On Tuesday, January 30, the Emergency Powers (Continuance) Resolution 2018 was approved in the House of Representatives.

The State of Public Emergency was announced and declared in St. James on January 18 by Prime Minister, the Most Hon. Andrew Holness.

On January 18, the Governor-General, by Proclamation, declared that a State of Public Emergency exists in the parish of St. James, and further declared that the said Proclamation shall, unless previously revoked, remain in force for 14 days or for such longer period, not exceeding three months, as both Houses of Parliament may determine by a Resolution, supported by a two-thirds majority of all members of each House.

Addressing the Senate, Leader of Government Business and Minister of Foreign Affairs and Foreign Trade, Senator the Hon. Kamina Johnson Smith, said more time is necessary, not only to reduce the risk of flare-ups at the end of the state of emergency, but to build intelligence and address not only the perpetrators but also the facilitators of crime.

“It will take time to take back St. James and Jamaica, but together as a people, we can do it,” the Minister said.

She thanked the citizens who have used the confidential lines to share information, and encouraged others to continue doing so by dialling 837-8888 or 311.

“If you have information about guns or wanted men or suspicious people in your community since the declaration of the state of emergency, you can and should call,” she said.

Senator Johnson Smith commended the security forces for executing their duties in a commendable way, adding that they are being meticulous and accountable in how they operate.

She added that, to date, no formal human rights complaints have been received. “This is a clear credit to the security forces and the systems of accountability put in place to secure the rights of citizens. The system is working,” she said.

During the State of Public Emergency, the security forces will have the power to search, curtail operating hours of business, restrict access to places and detain persons without a warrant. It also gives them power to stop and question persons and power to seize property. It allows them to control public gatherings and control movements.

The Minister said the establishment of the Emergency Review Tribunal gives citizens who may have been aggrieved during the course of the State of Public Emergency, direct recourse to legal consideration or to claim redress outside of the court system.

Meanwhile, Minister of State in the Ministry of National Security, Senator the Hon. Pearnel Charles Jr., said the state of emergency has been timely, effective and well managed.

“The state of emergency is not a complete fix to our problems, but when it is operated effectively and with respect for the human rights and dignity of our citizens, it can go a far way to move us in the right direction,” the State Minister said.

“Sustainable crime reduction will require fundamental changes, along with significant investments in our social and educational systems. This cannot happen overnight or with the wave of a magic wand. As a Government, we are committed to providing these inputs over the short, medium and long term,” he added.

Senator Charles Jr. said the security forces report that the state of emergency has resulted in the detention of 527 persons and the seizure of 12 firearms and approximately 225 rounds of ammunition.

He informed that among the persons detained are 12 wanted men connected to serious crimes, including murder and shooting.

For his part, Opposition Senator, K.D. Knight, said community support is critical in the fight against crime, and urged that the relationships with the citizenry and the security forces be strengthened.

“The Emergency Powers Act conferring all the extra powers on the security forces is not going to be the sole solution, it has to be a part of a package. Criminals must feel afraid and cannot be allowed to feel in charge,” he said.

The Constitution provides that a period of public emergency can be declared by proclamation if the Governor-General is satisfied that action has been taken or is immediately threatened by any person or body of persons of such a nature and on so extensive a scale as to be likely to endanger public safety.