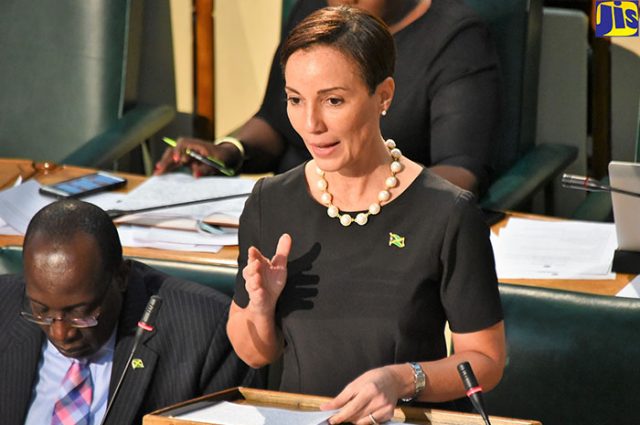 Leader of Government Business in the Senate, and Minister of Foreign Affairs and Foreign Trade, Senator the Hon. Kamina Johnson Smith, addresses recent sitting of the Senate.

Minister of Foreign Affairs and Foreign Trade, Senator the Hon. Kamina Johnson Smith, will preside over the Council of Ministers of the African, Caribbean and Pacific (ACP) States for the next six months.

Senator Johnson Smith’s tenure, which began on February 1, will last until July 2018.

This was disclosed by President of the Senate, Tom Tavares-Finson, during a recent sitting.

Offering congratulations, Mr. Tavares-Finson said it is expected that there are significant developments to take place within the organisation during Mrs. Johnson Smith’s tenure.

“It is expected that her time will culminate with the completion of the negotiations of the position of the ACP with the European Union. So best of luck to you,” he said.

In her response, Senator Johnson Smith said Jamaica continues to play its role through the ACP Group, adding that she is “proud, honoured and humbled to take that role”.

“This will be the sixth time that Jamaica is taking the Presidency in the 43 years of the organisation,” she said.

She pointed out that other Jamaicans who served in that capacity included former Prime Ministers, the Most Hon. P.J. Patterson and the Most Hon. Hugh Lawson Shearer; and former Minister of Foreign Affairs and Foreign Trade, Senator K.D. Knight.

For his part, Senator Knight congratulated Mrs. Johnson Smith, adding that “I know that you will make Jamaica proud”.

“I know that you will also make the ACP proud. I know that there can be some difficulties negotiating with the EU, but you are equal to the task, and if there is any assistance I can give to you, I will,” he added.

The ACP Group is an organisation created by the Georgetown Agreement in 1975. It comprises 79 African, Caribbean and Pacific States, with all of them, save Cuba, signatories to the Cotonou Agreement, also known as the ACP-EC Partnership Agreement, which binds them to the European Union. There are 48 countries from sub-Saharan Africa, 16 from the Caribbean and 15 from the Pacific.

The Group’s main objectives include sustainable development of its member-states and their gradual integration into the global economy, which entails making poverty reduction a matter of priority and establishing a new, fairer, and more equitable world order; coordination of the activities of the ACP Group in the framework of the implementation of ACP-EC Partnership Agreements; consolidation of unity and solidarity among ACP States as well as understanding among their peoples; and establishment and consolidation of peace and stability in a free and democratic society.