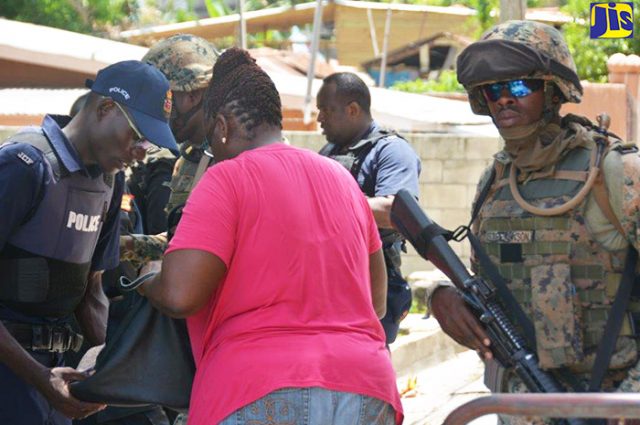 With more than 10 days since the establishment of the Zone of Special Operations (ZOSO) in Mount Salem St. James, senior residents are expressing their appreciation for the security exercise.

“I am really hoping that the peace we are now experiencing will last,” said 68 year-old Allan Plummer, who has lived all his life inside the community.

Mr. Plummer who spoke to JIS News on September 13 said things have been going well in the area over the past two weeks.

“The other night I forgot to lock my door. I can also tell you that for the first time in recent memory, I didn’t have a fear in the world. This is the Mount Salem I used to know and the one that I really want to go back to,” he added.

For his part, 75 year-old Ruben Smith said he remembered the days when the only sounds to be heard at night were “the loud barks of the dogs on the streets”.

“Before the security forces got here, it was a regular thing to hear the guns barking at nights and we were like prisoners inside our homes. With the heavy presence of the police and soldiers, you no longer hear the gunshots and people can sleep safe knowing there is nobody who will be kicking down your door, or will be doing anything to threaten your safety,” he told JIS News.

Meanwhile, 67 year old Samuel Grant noted that since the implementation of the Zone of Special Operations, there has been “a noticeable difference in the relationship with the people and the security forces.”

“Whatever apprehension there was in the beginning, is now long gone and replaced by trust and respect. The police and soldiers have been very professional and are now being well received by residents. We know they are here to make our community safe again and that is all we are asking for,” Mr. Grant stated.

The law seeks to contain crime while safeguarding the human rights of residents and promoting community development through social intervention initiatives.

The security operations in Mount Salem will last for 60 days.