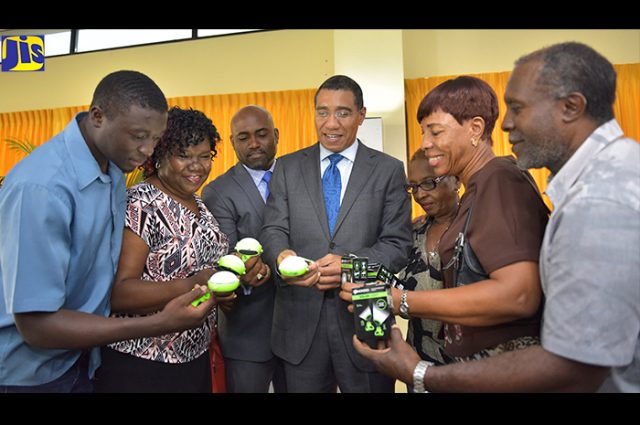 Prime Minister, the Most Hon. Andrew Holness (centre), and Science, Energy and Technology Minister, Dr. the Hon. Andrew Wheatley (third left), examine solar lanterns that were handed over to seven constituencies at the Office of the Prime Minister in St. Andrew, on April 30. Also examining the lanterns (from left) are Zavia Walker, Kathleen Grant, Jean Dallas, Sandra LaTouche and Samuel Williams, representing the various constituencies.

Seven constituencies in Kingston and St. Andrew are to benefit from a pilot programme that will result in solar lanterns being distributed to replace opens flames used as sources of light in vulnerable communities.

The pilot programme is the result of instructions given by Prime Minister, the Most Hon. Andrew Holness, to the Ministry of Science, Energy and Technology and one of its agencies, the Petroleum Corporation of Jamaica (PCJ), following a series of tragic fires.

The fires claimed the lives of children in a number of vulnerable communities, including the Walkers Place of Safety in Kingston and Cockburn Pen in West Central St. Andrew.

“Effectively, this is what it (the pilot programme) amounts to, the Government giving a subsidy in solar technology for households that are deemed to be energy poor,” the Prime Minister said, at a ceremony to hand over the lanterns to Members of Parliament, at his Devon Road offices in St. Andrew on April 30.

At least three bulbs per household will be distributed during the pilot phase of the project.

Mr. Holness acknowledged that this short-term response by his Administration is only the beginning and does not constitute the “entirety of the Government’s response” to dealing with the issue of open flames being used in vulnerable households.

He suggested that long-term consideration could be given to the use of energy grants, as is done in some countries.

In Ireland, for instance, under the Better Energy Programme, grants are provided to low-income households vulnerable to energy poverty, to upgrade their energy efficiency.

“The Government could consider that there should be a minimum right to electricity, but what would be the cost of that and could the Government afford it; can the Government put energy as a welfare grant, such as a cash coupon through the Programme of Advancement Through Health and Education (PATH); but we’re not at that stage just yet,” he said.

“Certainly, at some point in the future as we seek to refine our social safety net, we will have to restructure our public expenditure in such a way that we give some minimum safety net to our citizens,” he added.

Mr. Holness informed that a study will be commissioned from the project to examine its usefulness for scale-up as an islandwide project.

Meanwhile, Science, Energy and Technology Minister, Dr. the Hon. Andrew Wheatley, commended the PCJ for acting expeditiously on the initiative.

Dr. Wheatley believes that the distribution of the solar lanterns will provide opportunities for employment as well as to raise the level of awareness of renewable energy efficiency and conservation.

The Minister used the opportunity to provide an update on the country’s current renewable energy use, noting that approximately 18 per cent of the country’s electricity is from renewables.

The 2009 National Energy Policy indicated that by 2030, the country should achieve 20 per cent of its energy from renewables.

For his part, Member of Parliament for East Kingston and Port Royal and Opposition Spokesman on Energy and Mining, Phillip Paulwell, expressed gratitude to the Government for the solar lantern provisions.

Mr. Paulwell, who was a recipient of the lanterns and who represented Leader of the Opposition, Dr. Peter Phillips, said the renewable energy sector is one in which both the Government and Opposition have coalesced.

Costing a total of US$44,380, the 5,040 lanterns have been procured from Nokero International Limited, headquartered in Denver, Colorado, in the United States.

The lantern is equipped with three settings and when charged by sunlight offers a bright beam of light for approximately six hours. The low beam offers more than 20 hours of illumination.

Known as the Nokero N233, it has been described as one of the most efficient off-grid lights. It is bright enough for reading, working or lighting up a small space and can withstand years of daily use in the world’s harshest conditions.