The crowning of U-Roy by Shabba Ranks and Garfield "Chin" Bourne was a historical moment at the 10th Anniversary of 'Reeewind.' 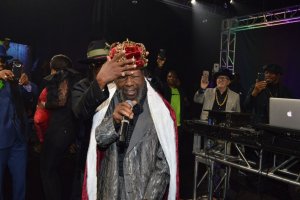 December 2, 2019 — New York, New York (Irish and Chin) — There wasn’t a dry eye amongst scores of music lovers during the 10th Anniversary of “Reeewind” on Friday, November 29 in Queens, New York. Overcome with emotions, the audience witnessed Shabba Ranks ‘The Emperor’ ceremonially crown a tearful U-Roy ‘The Godfather’ of Reggae Dancehall during a historical moment planned and executed by Garfield “Chin” Bourne, CEO of Irish and Chin and Sound Chat Radio.

“You are the Godfather of the music, the Father who set it. You are wi aspiration and inspiration and the greatest DJ of all time! We will never, ever, ever see or have another man to represent the music like you Daddy U-Roy,” says an emotional Shabba Ranks.  “All I can say to God is to give you long life. I love you more than the music and salute you with the life and the breath I have. God Bless you for being the foundation and letting music be the foundation in I&I criteria. U-Roy is the Picasso of our music and when he was creating that portrait, Shabba is there inna it. Salute!” 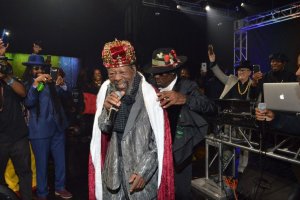 The crowning of U-Roy, which went viral, sparked emotions through out the Reggae Dancehall music industry.

U-Roy, who is also hailed as “The Teacher” and “The Originator” was grateful and overjoyed by the crowning. “I have to say, I have been in the industry for 58 years and just turned 78 a couple of months ago. I can’t even believe and know there is so much love and respect out there for me. People, I have to thank you and respect you because you respect me to the max,” says an overjoyed U-Roy.

The monumental occasion was symbolic of Bourne’s career long quest of honoring the Jamaican music veterans while they are still alive. Through platforms like “Sound Chat Radio Live” “Sound Chat TV” and “Reeewind,” the popular entertainment specialist and radio personality Bourne continues his mission. The 10th Anniversary of “Reeewind” was an ideal stage to honor the living legend U-Roy, an innovative DJ, recording artist, sound system owner/operator (King Stur Gav) and Jamaican music pioneer for his lifelong instrumental role in Reggae Dancehall music and culture. 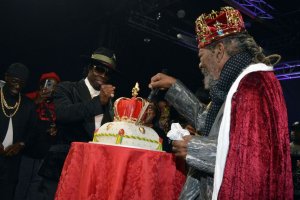 The cutting of the cake by Shabba and U-Roy is symbolic of U-Roy’s impact on generations of artists.

“It is extremely important that we continuously include the contributions of our veteran artists and musicians in our conversations about Jamaica’s rich music culture,” says Bourne.  “They are the root of the Reggae tree in which the world is now picking fruit from!”