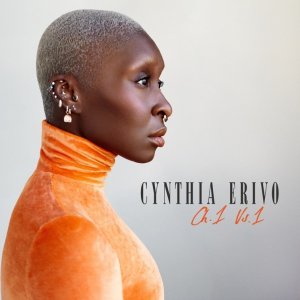 NEW YORK and LOS ANGELES, June 8, 2021 /PRNewswire/ — Grammy® and TONY Award-winner and Academy Award nominated singer-songwriter Cynthia Erivo today announces her debut album of original music as a recording artist Ch. 1 Vs. 1 set for release on September 17 on Verve Records. Today, she releases her anthemic pop-soul debut single “The Good” – which she co-wrote – with a stunning music video about Black queer love, intimacy and break-ups.

Erivo will make her debut performance of “The Good” on THE LATE SHOW WITH STEPHEN COLBERT this coming Monday, June 7 on CBS and will perform on the TODAY SHOW Citi Music Summer Concert Series on August 20 on NBC.

“In storytelling, chapter one and verse one is the way you always begin, and because I believe I’m a storyteller, that’s what I wanted to do with my music,” says Erivo. “That’s what this is about, just starting [and revealing] the human parts of me that you don’t often get to see.”

By way of a 12-track journey into her mental and emotional landscape—one marked by heartbreak and sadness, but also triumph and growth—Ch. 1, Vs. 1 is the perfect soundtrack to a still-unfolding talent ready to be seen in her fullness, beyond the stage and screen and high fashion red carpet gowns and extravagant nail art. “Just as me, Cynthia,” she says.

A showcase of both Erivo’s vocal stylings as well as her pen—she co-wrote every song—the album is perfectly suited for this moment in culture forever marked by a global pandemic and ongoing racial reckonings. With the bulk of the tracks written and recorded over the last two years, Erivo saw it as “a duty to tell people something.”

Today marks the release of the first single from the album, “The Good,” a heart-pounding pop-soul anthem, or “joyful breakup song” as Cynthia describes it. This song is about the positive memories that can help heal a loss, about remembering the good.

Directed by Mollie Mills, the music video for “The Good” is as cinematic as it is important for its representation of Black queer love on screen. Featuring Erivo as a woman remembering the positive memories of her failed relationship, the video captures the subtleties and nuances of love between two Black women with a care and intimacy often absent from such portrayals.

“I wanted to normalize seeing Black women in a relationship on screen, because often it’s really fetishistic,” Erivo says. It was important to have “something that felt full of heart” and told the story of a relationship that had meaning to the couple but just didn’t work out.

Ch. 1, Vs. 1 is more than just a long-awaited debut album of original music from the celebrated singer; it is a sonic declaration of identity and humanity and is a sweeping reintroduction dripping in authenticity and truth.

“It would be a wasted opportunity to not express all that I am,” Erivo adds. “This is probably one of the first times I’ll get to just be myself, and be myself fully.”