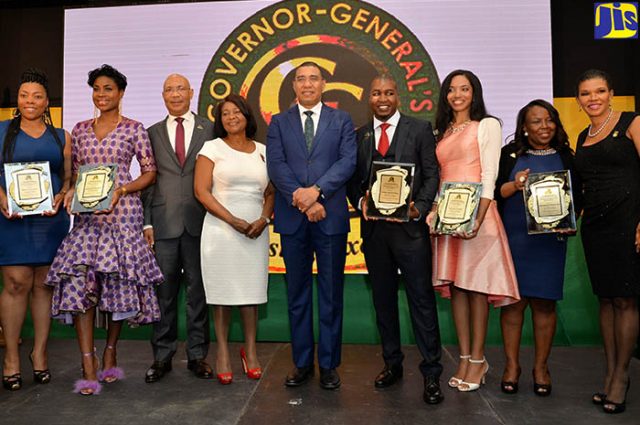 Their Excellencies, Governor-General, the Most Hon. Sir Patrick Allen, and the Most Hon. Lady Allen (third and fourth left, respectively); along with Prime Minister, the Most Hon. Andrew Holness (centre, share a photo opportunity with recipients of the 2017 Governor-General’s Achievement Award. The presentations were made during the opening of the Jamaica 55 Diaspora Conference at The Jamaica Pegasus hotel in New Kingston on Sunday (July 23). The award recipients (from left) are: Executive Board Member and Communications Chair of the Jamaican Diaspora Canada Foundation, Future Leaders Chapter, Donika Jones; Diaspora Advisory Board Member – Future Leader, Tanesha Westcarr; Lawyer, Vendrys Henry; Future Leader in the Jamaican Diaspora in the North East of the United States of America, and adult education programme developer, Erin Lue-Hing; and President of the Jamaican American Bar Association, Joan Pinnock. The other recipient, Superintendent of Education in the Toronto District School Board in Canada, Bishop Glenroy Duffus, was absent. Also pictured is Jamaica’s Ambassador to the United States, Her Excellency Audrey Marks

Six members of the Jamaican Diaspora have been bestowed with the 2017 Governor-General’s Achievement Award (GGAA) in recognition of their outstanding contribution to the country.

The award recipients are: Lawyer, Vendrys Henry and Diaspora Advisory Board Member-Future Leader, Tanesha Westcarr, from the United Kingdom (UK); Future Leader and Adult Education Programme Developer, Erin Lue-Hing; and President of the Jamaican American Bar Association, Joan Pinnock from the United States of America (USA); and Executive Board Member and Communications Chair of the Jamaican Diaspora Canada Foundation, Future Leaders Chapter, Donika Jones; and  Superintendent of Education in the Toronto District School Board, Bishop Glenroy Duffus from Canada.

Governor-General, His Excellency the Most Hon. Sir Patrick Allen, made the presentations during the opening of the Jamaica 55 Diaspora Conference at The Jamaica Pegasus hotel in New Kingston on Sunday (July 23).

He noted that since 2008, the GGAA has been partnering with the Diaspora Conference to recognise those persons, who have been doing outstanding work in the Diaspora and have been working to build the country.

He said that the six recipients “who embody the values that we, as Jamaicans, hold dear,” have been serving quietly and consistently in their communities locally and in the Diaspora.

“I want to thank you for all that you do for Jamaica – preserving the Jamaican character of enterprise, energy, creativity, cooperative endeavours in your countries of residence,” he said.

Responding on behalf of the award recipients, Miss Pinnock, thanked the Governor-General for “recognising our priceless and valuable contributions through volunteerism.”

“Our induction into this prestigious cadre of GGAA nation builders is a most welcome encouragement that will sweeten future labour,” she said.

Miss Pinnock encouraged Jamaicans living in the Disapora and locally to give back and serve their country, as this will redound to the benefit of all citizens.

“I believe that by serving our country and communities, we will strengthen Jamaica and make it more cohesive….it requires every one of us to make the black, gold and green (flag) fly proudly as we ensure that by 2030, our little rock is a place of choice to live, work, raise families and do business,” she said.

The 2017 GGAA programme was held under the theme: ‘Inspiring and Energising Communities to Serve’.

The programme was first introduced in 1991 by late former Governor-General, His Excellency the Most Hon. Sir. Howard Cooke to recognise individuals 35 and older, residing in Jamaica who had achieved greatly despite difficult and challenging socio-economic circumstances. The programme was expanded to include the Jamaican Diaspora in 2006.

To be eligible for the Diaspora award, members would need to be nominated by a Diaspora organisation or a Jamaica-affiliated organisation in the region of residence.

They must be Jamaican by birth, descent, registration, marriage or naturalisation; has made worthwhile contribution to the development of Jamaica or a Jamaica community in the Diaspora over a specific period of time; and has made his or her contribution in the public’s interest.

In addition, through initiative or voluntary activities, members should have had a positive effect on a significant number of Jamaicans. Also the individual has made his or her contribution and gained achievements while acting as a private citizen.

The individual should not be an appointed or elected Government official, nor have received national honours or the Prime Minister’s Award for Excellence.