Spragga Benz Back In The News, Meets Prime Minister Mottley of Barbados 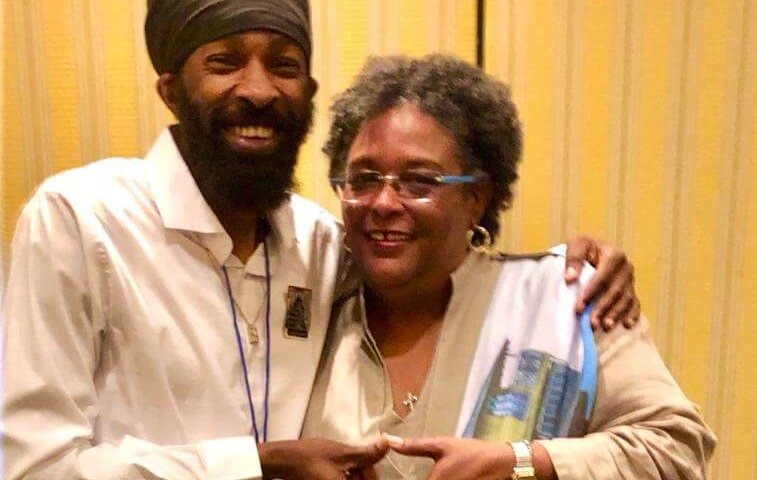 International reggae dancehall deejay, Spragga Benz  is back in the news, less than a month after his acapella tribute titled “Sleep with Angels” at Merciless send-off was the buzz on social media platforms.

In an interview with Vision Caribbean TV the deejay says, “My meeting PM Mottley is a blessing. I had always wanted to meet with such a strong and decisive person. She is one who cares much about her people.”

Last November 2021, Barbados removed the British monarchy as head of that country and became a republic.

Spragga was delighted with the PM expressing her love for his music.

“This will definitely  strengthen reggae music in the region and give young talents a broader landscape to promote their music. I will also be using this occasion to promote Red Square conglomerate music and to strengthen our fan-base in Barbados.”

Spragga Benz was among some 300 participants attending the three-day Fintech Island Seminar held at the Hilton Ballroom in St. Michael.

“It is better to learn to navigate amidst this new reality than to be steamrolled by it when it is fully launched,” the deejay said.

Spragga used the better part of Friday for promoting his music via radio and interviews.

Barbados had accommodated a number of dancehall acts in the past. They include Agent Sasco, Sizzla and Wayne Wonder.

Spragga has made appearances on shows including Buju Banton’s Long Walk To Freedom concert.

Born Carlton Grant, he began his career in the 1990’s with a slew of songs, including “jack It Up” “Coulda Deal, “Girls Hooray,” and “Things A Gwaan.”

He has done collaboration with a number of high-profile artistes including Foxy Brown, Wyclef Jean, Nas and KRS-One.

His first major movie Shottas (2002) has made the Kingston-born a hero, while his latest Second Chance is destined to repeat that glory.

Spragga Benz will soon be releasing his latest, Once Upon A Time album with veterans, including Marcia Griffiths and Beres Hammond.