LOS ANGELES, Sept. 21, 2021 /PRNewswire/ — Stand Up To Cancer® and Hip Hop Public Health, an organization dedicated to building health equity through the transformative power of music, art and science, have joined forces to create a health literacy initiative featuring an original song and music video that raise awareness about the importance of colorectal cancer screening. The PSAs specifically focus on reaching Black and Hispanic Americans, who are disproportionally impacted by low colorectal cancer screening rates. Colorectal cancer is the second most common cause of cancer death among American men and women combined. 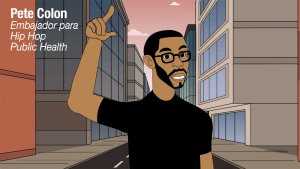 “Stand Up To Cancer is committed to helping more people diagnosed with cancer become long-term survivors and, when possible, early detection through screening is critical to making this happen. With regular screening, colorectal cancer is highly preventable as well as beatable in 90 percent of cases when detected early, but many Black and Hispanic Americans are not getting the recommended screening,” said Sung Poblete PhD, RN, CEO of Stand Up To Cancer. “We are thankful to Chuck D and Pete Colon for lending their voices to this collaborative campaign with Hip Hop Public Health.”

“As the disparities in colorectal screening rates continue to increase, it’s critical to take tangible steps to address the disparities that exist in colorectal cancer screenings within the Black and Hispanic communities,” said Olajide Williams, MD, founder and board chair of Hip Hop Public Health. “Music has the power to spark change and inspire communities to take action when it comes to their health. Collaborating with Stand Up To Cancer, Chuck D, and Pete Colon on this campaign, we are utilizing music to deliver the important message that regular screenings can save lives.”

“I’m honored to be a small part of the important work that Hip Hop Public Health and Stand Up To Cancer are doing,” said Chuck D. “Hip-hop has a powerful voice and we’re using it to help make the community better, to try to get people to pay attention, to stay healthy and to catch things early instead of reading about it when it’s too late.”

“It’s important for me to use my voice to increase awareness of colorectal cancer’s impact on the Hispanic community. This disease is one of the most diagnosed cancers among Hispanics in the United States,” said Pete Colon. “Through this collaboration, we have the power to raise awareness on the critical importance of getting screened because early detection can help save the lives of those diagnosed.”

This campaign is the latest in a series of PSAs by SU2C to increase awareness about the importance of cancer screenings and clinical trials in Black and Hispanic communities. SU2C formally announced its Health Equity Initiative in January 2020. To date, the initiative has focused on increasing diversity in cancer clinical trials, initiating advocacy group collaborations and awareness campaigns, and establishing research teams focused on improving cancer outcomes and screening rates in medically underserved communities.

SOURCE Stand Up To Cancer