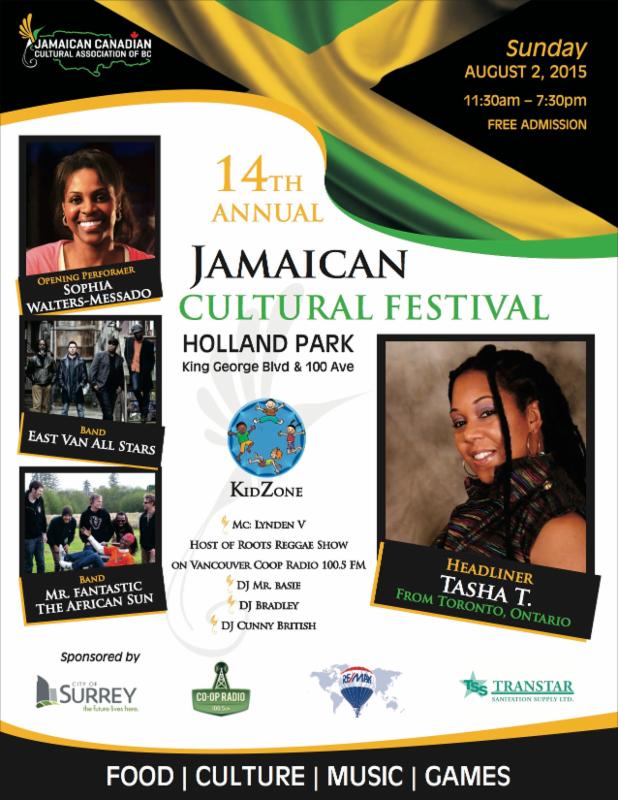 On Sunday, August 2, 2015 hosted by the Jamaican Caribbean Cultural Association of British Columbia (JCCABC), Tasha T has been honored with an invitation to headline their 14th Annual Jamaica Cultural Festival in Vancouver, Surrey BC hosted in celebration of Jamaican Independence. Gates open for the free admission Festival beginning at 11:30 AM at the Holland Park in Surrey, BC. As a non-profit organization, part of the mission statement of the JCCABC involves organizing high-quality special events and working in  cooperation with various Canadian based grass-roots organizations to highlight and support Jamaican lifestyles and culture from social and economic perspectives.

Tasha T is expected to to perform several popular selections from her most recent album “Real Talk” (Ras Vibe/VP Records).  The album has been hailed as a timely assemblage of musical narratives set to Reggae music that comes at a time when the world needs positive sensitive music relevant to current social issues. Tasha T’s ability to transform the imagination of audiences with a “keeping it real style” makes her a sought after performer and tribute to women in Reggae.  “Real Talk” has been on the rise on major Reggae charts in Canada with favorable responses in the US and Italy too. For additional information about the JCCABC Festival visit www.jccabc.ca.

In other great news, Tasha T has recently been nominated to receive the International Indigenous Release Award for her “Real Talk ” album. Winners are presented at a Black Tie Gala taking place on September 11, 2015 in Winnipeg, Manitoba, Canada. Voting polls are currently open and friends and fans are encouraged to stop by, register and vote for Tasha T via the site IndigenousMusicAwards.com; voting ends on Friday, July 24, 2015. The nomination is Tasha T’s fourth in 2015 including the prestigious JUNO Award, International Indigenous Release, Best Caribbean Style  and the International Deejay/Singjay Award.