I Wanna Be With You (Explicit)

Tydal and friends give back to St Mary 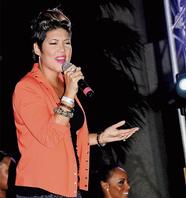 Many eyes were glued to American TV station NBC last night as Jamaican singer Tessanne Chin literally blew away the coaches and audience when she auditioned for Emmy Award-winning vocal competition ‘The Voice’.

The final performer for the two-hour show, Tessanne, who was accompanied by her husband (Michael Anthony Cuffe Jr.) and father (Richard Chin), spoke about her career and her journey as an artiste prior to her performance. She also saw a video from Jimmy Cliff, who she sang back-up for in the past, wishing her the best of luck in the competition.

Although she said she was nervous as she started singing Pink’s Try, the audience stood and within seconds, three of the four coaches (Adam Levine, Ceelo Green and Christina Aguilera) turned their chairs. Blake Shelton, however, was not very far behind.

At the end of the song, the battle began among the coaches as they begged Tessanne to join their respective teams.

Adam Levine, who stood and applauded her after the performance, said, “You can easily win the voicethis year. I don’t have a doubt in my mind.”

Blake Shelton quickly followed and said, “I won’t lie to you and tell you that it’s easy, it’s very hard.”

In a very desperate manner, Adam tried even harder to persuade Tessanne to join his team and said, “I want you, I want you bad.”

Meanwhile, Christina Aguilera was very open when she said, “I think we are all very desperate to have you. There is so much passion and so much heart. You are a powerhouse, unbelievably talented artiste.”

But in the end, despite the many attempts at persuasion, Tessanne chose Adam as her coach.

Immediately after the performance last night, Tessanne was also the number four trending topic on Twitter, with ‘Kingston Jamaica’ not far behind. Many persons who were waiting to see her on Monday night during the first audition show, also commented on Twitter and Facebook.

Towards the end of the show Christina Aguilera also tweeted, “Girl doesn’t need coach & forget singing, just want to hear her talk. Have her sing me a lullaby – voice of an angel! :)”

Minutes after the show, Tessanne also expressed much gratitude to her supporters.

“Just wanna say a huge thank you for all the love and support, I am truly overwhelmed!!! Words fail me, all I can say is THANK YOU ááá!!!!,” she said.