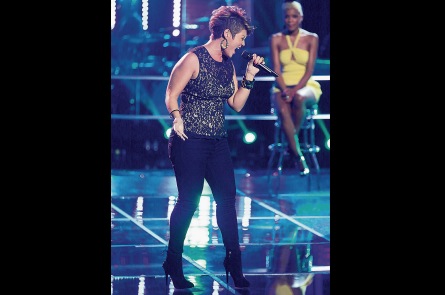 SONGSTRESS Tessanne Chin credits the advice she receives from Adam Levine, her coach on The Voice, for guiding her through the competition so far.

Her comments come after another win Monday night on the NBC talent show. Speaking to the Jamaica Observer, the powerhouse Jamaican singer stated that the best advice Levine — front man for rock band Maroon 5 — has given her

is to remain true to herself.

“He (Levine) just keeps impressing on me how important it is to just stay true to me, think from the heart… he will say to me, ‘I am not feeling you so, you have to put yourself in every song and make people believe it.'”

Chin admits she still gets a little star-struck when working with Levine, but notes that she is impressed by his ear

“He does not miss a thing. I am hard on myself, and he is just as tough, pushing me to give the best possible performance. I just relish this chance to work with him and listen to what he has to offer.”

Reflecting on Monday’s performance where she was pitted against Ashley Dubose, Chin explained that she was nervous as she did not know what her coach was looking for.

“Ashley and I are two different voices. I really rate her tone and vocal range, but because I did not know what the judges were looking for I had to be fierce, no play-play thing. I was just doing my best to represent Jamaica, while at the same time fit into this wonderful situation that I find myself.”

Should she win The Voice, Chin hopes to record an album with a “pop-rock island vibe” filled with all her musical influences.

“I love the music of Pink and Adele, I am loving Emeli Sandé’s new album and Lana Del Rey… I just want to make good, lasting music that will be around for a long time even when I am not around.”

Meanwhile, the international media continues to monitor Chin’s journey. Entertainment Weekly’s Jennifer Arellano named her the favourite for this season’s

“We all know Tessanne is the frontrunner in the whole competition. Ashley goes meek with her song choice, in her attempt to show her sillier, lighter side. But it’s going to take more than a quirky side to dethrone Tessanne,” the writer said in her online article.

For the original report go to http://www.jamaicaobserver.com/entertainment/Tessanne-takes-Adam-s-advice_15353960