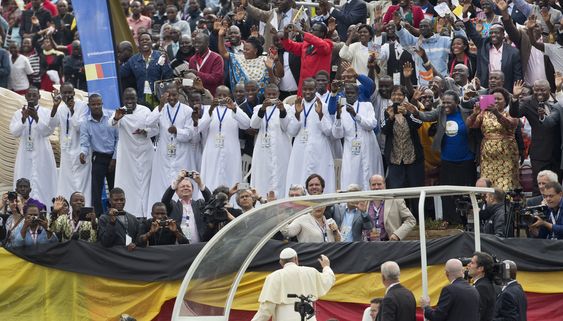 The Vatican estimates that some 300,000 people attended Pope Francis’ morning Mass in and around Uganda’s most important Christian shrine, far fewer than the 2 million predicted by shrine authorities.

The Vatican spokesman, the Rev. Federico Lombardi, released the crowd estimate on Saturday.

He says another 150,000 young people have gathered at an unused airstrip in Kampala for Francis’ other big public event of his day, a pep rally.

The crowd is chanting: “We love you!”

Testifying before Pope Francis, a 24-year-old Ugandan woman who has the virus that causes AIDS is urging young Ugandans to live responsibly.

Winnie Nansumba, who was born with HIV and lost both her parents before she turned seven, says she has been able to get treatment thanks to the kindness of others.

Nansumba is one of thousands of young people who are attending a huge rally at an airstrip in the Ugandan capital, Kampala. Francis will address the youths.

She says: “A word is enough for a wise person. HIV is real but it can be prevented and managed. Take charge of your life because God loves you and he wants you to continue to bear witness (amid) all the challenges faced by young people.”

Uganda’s HIV prevalence rate now stands at 7.4 per cent, up from about 6 per cent a decade ago, raising concern among AIDS activists who want President Yoweri Museveni’s government to step up the old prevention campaigns that in the 1990s made Uganda a global leader in controlling the spread of HIV.

As in Kenya, the first stop on the pope’s tour of Africa, Francis has met with young people share some wisdom and encouragement.

Pope Francis has arrived at a massive gathering of Ugandan youths for a pep rally before heading to the Central African Republic on Sunday on the final leg of his African pilgrimage.

For hours, thousands of people have been treated to a blend of tribal dancing and African rock at a disused Kampala airstrip.

Francis is receiving a rousing welcome from the crowd, driving around on his open-sided popemobile as fans cheer wildly.

Francis is expected to hear testimony from two Ugandan youths about the challenges they are facing before speaking to the crowd himself. When Francis presided over a similar gathering in Nairobi, he delivered a spontaneous off-the-cuff monologue on the evils of corruption and the dangers of radicalization.

Pope Francis has urged Ugandans to be missionaries at home by taking care of the elderly, the poor and abandoned.

Francis made the comments during Mass on Saturday at Uganda’s most famous Christian shrine: the site where 45 19th-century martyrs were tortured and burned alive rather than renouncing their faith.

Francis told the faithful at the Namugongo shrine that they should look to the example of the martyrs in spreading the faith.

He says: “This legacy is not served by an occasional remembrance or by being enshrined in a museum as a precious jewel. Rather we honour them and all the saints when we carry on their witness to Christ, in our homes and neighbourhoods, in our workplaces and civil society, whether we never leave our homes or we go to the farthest corner of the world.”

Amid cheers, Pope Francis arrived at the Catholic shrine to celebrate Mass just outside the Ugandan capital.

He was driven around in his open-sided popemobile, waving at tens of thousands of pilgrims occupying the terraced pavilion on the grounds of the shrine, a minor basilica that is dedicated to 22 Catholic martyrs who were killed in the late 19th century on the orders of a local king.

Francis is in Uganda to commemorate the 50th anniversary of the canonization of the martyrs by Pope Paul VI.

Ugandan President Yoweri Museveni is among the dignitaries attending the Mass, where Francis is expected to praise the example set by the martyrs who were burned alive when they refused to renounce their faith.

Even after the pope’s arrival, thousands more pilgrims were still trying to access the shrine.

Peter Sebandeke, a 73-year-old catechist, pondered the long line of people and gave up.

Firming himself up with his umbrella, he said: “I will just stand here in this spot and hope to see the pope. That will be enough.”

He did get to see the pope.

Pope Francis has visited an Anglican shrine that is dedicated to a group of Christians who were killed in the late 19th century on the orders of a local king who wanted to stem the rise of Christianity.

Francis, arriving in his open-sided popemobile, was welcomed Saturday morning by Anglican bishops who gave him a tour of the sanctuary inside the shrine.

Hundreds of people lined up along the narrow road leading to the shrine, hoping to catch a glimpse of Francis. He will later celebrate Mass at a nearby Catholic shrine dedicated to 22 Catholic martyrs who were canonized in 1964.

Children in school uniform are among those lining up to enter the two shrines. At the Catholic shrine, women are serving food and drinks to pilgrims just happy to watch the Mass on giant screens set up outside.

Willis Olwora, a civil servant, who was among those hoping to see Francis at the Anglican shrine, said that the pope’s message on loving and respecting one another “touched the hearts of so many here, including mine.”

He says: “I am praying for peace, especially during this time of elections.”

Some of the pilgrims waiting for Pope Francis at Uganda’s most famous Catholic shrine have been here since lunchtime Friday, hoping to score a good spot to see his first Mass in the country.

Pilgrims were camped out on mats, bundled in blankets against the morning damp chill as final preparations got under way at the Namugongo shrine. The site is where most of the 45 Anglican and Catholic martyrs were burned to death in the late 19th century on orders of the local king after they refused to renounce their faith.

The 27-year-old Benah Ssanyu showed off the mud encrusting her sandals and pants _ evidence of her 1 p.m. Friday arrival that scored her a prime, front row seat for Francis’ Mass honouring the martyrs.

She says she didn’t mind the mud or the rain that soaked her overnight. She says the martyrs were a fundamental part of her faith: “They are so important because they sacrificed their life because of their religion.”

Tens of thousands of people are streaming into a Kampala sanctuary where Pope Francis will celebrate his first Mass in Uganda honouring the country’s martyrs.

As the sun rose Saturday over Namugongo shrine, pilgrims arriving on foot found spots in the park area where they could follow the Mass as venders sold rosaries, Mass booklets, pope calendars and plastic figurines of the Madonna.

Francis is due to pray first at the shrine honouring the 23 Anglican martyrs killed on orders of the local king in the late 1800s, and then at the nearby shrine marking the spot where another 22 Catholics were killed, many burned alive after they refused to renounce their faith.