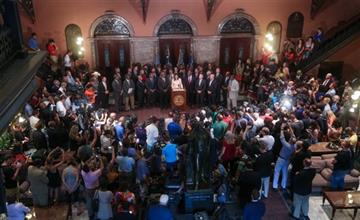 (AP)- Just about everyone arriving at a rally to remove the Confederate flag from South Carolina’s Capitol grounds took a picture of the banner flying atop a 30-foot pole.

Several dozen people had gathered about 30 minutes before the rally was to begin Tuesday. A few of them held sign supporting Gov. Nikki Haley’s call to remove the flag and put it in a museum.

One of the most popular spots to take a picture was near the base of a Confederate soldier’s monument. There is no security directly beside the flag pole, but dozens of officers are posted nearby.

The small crowd was waiting for the rally to start under shaded trees because temperatures were expected to be in the 90s. Volunteers handed out water.

However, the Rev. Norvel Goff says the historic church’s focus will stay on the “homegoing celebrations” of the nine people killed inside, including slain senior pastor Clementa Pinckney.

Dylann Storm Roof, who has appeared in photos holding Confederate flags, is charged with the murders.

Goff says it is time for the Confederate flag to come down “because of what it represented.” But the loss of Pinckney and the others is foremost for the church right now.

“Most certainly the flag is an issue, but there are other issues that need to be addressed in addition to that,” Goff says. “There is a time and place for everything.”

Virginia’s governor is moving to have the Confederate flag banished from state license plates.

Virginia vanity plates include one that pays homage to the Sons of Confederate Veterans.

McAuliffe said he’s asked Attorney General Mark Herring to take steps to reverse a 2002 federal court decision that said Virginia could not block the Confederate Veterans from displaying its logo _ which includes the Confederate flag _ on state license plates.

At the same time, McAuliffe has asked his secretary of transportation to replace the plates depicting the flag.

McAuliffe called the Confederate flag “hurtful” to too many people.

Republican Lt. Gov. Henry McMaster said on his official Facebook page Tuesday that “the time has come to consider an appropriate location for the Confederate flag.”

McMaster’s comments come a day after his fellow Republican, Gov. Nikki Haley, called on legislators to vote to remove the flag from the Statehouse grounds in Columbia.

McMaster chaired the state’s Republican Party in 2000 when a compromise was reached to move the flag from atop the Capitol dome to a Confederate monument. During his failed 2010 gubernatorial bid, the former U.S. attorney and state attorney general said he considered the issue resolved.