The Military Women's Memorial's traveling "Color of Freedom" exhibit spotlights women of color who served alongside the U.S. Armed Forces from the Civil War era to the present day.

ARLINGTON, Va., Feb. 8, 2022 /PRNewswire/ — In time for Black History Month, the Military Women’s Memorial (MWM) is launching the “AppreSHEation Tour” which will bring its mobile exhibition, The Color of Freedom: Honoring the Diversity of America’s Servicewomen to locations throughout Virginia and across the United States.

The interactive display will include the stories of twenty-one servicewomen of color, and bring to light the impact that these women made while serving in various branches of the U.S. military. In addition to content from the original Color of Freedom exhibit installed at the Military Women’s Memorial in March 2021, QR codes will enable viewers to access a selection of oral history recordings which were digitized with the support of Iron Mountain Entertainment Services and Iron Mountain’s Living Legacy Initiative. 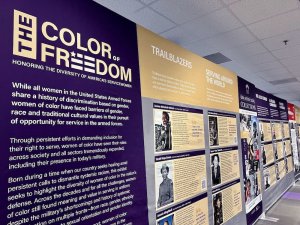 “The Color of Freedom exhibit is an important example of preserving our shared cultural history,” says Lance Podell, senior vice president, Iron Mountain Entertainment Services. “Supporting the Military Women’s Memorial team is a powerful way to ensure these servicewomen and their contributions are cemented in history and archived for others to learn from and experience.”

Viewers will also have access to a sampling of the stories from other women represented in the Memorial’s 1,400+ file oral history collection.

Aptly named, the “AppreSHEation Tour” seeks to educate the public on the sacrifices and contributions of the diverse individuals who paved the way to allow for women of all backgrounds to serve our country in the U.S. military and beyond. One such woman whose story is highlighted in the exhibit is Women’s Army Corps (WAC) Private First Class Sarah Keys, who stood up to discrimination in 1952 by refusing to give up her seat on a bus to a white passenger three years before Rosa Parks’ iconic act.

“The history of minority women in the military is often untold or underrepresented,” says Britta Granrud, Director of Collections and Curator for the Memorial. “In keeping with the Memorial’s mission to educate and inspire, The Color of Freedom exhibit highlights narratives of determination to overcome discrimination on multiple fronts. Diversity is our strength and women of color have been and continue to play integral roles in our nation’s military and beyond.”

The project also seeks to be a catalyst for continued discussions on racial and gender disparities within the armed forces. Despite recent improvements, minority servicewomen continue to experience higher rates of discipline while serving and remain underrepresented in career fields that historically lead to leadership positions, according to a 2021 Department of the Air Force report.

The original Color of Freedom exhibit, which was featured on NBC’s The Today Show, is featured in the main exhibit gallery along with the permanent women’s military history exhibits on display at the Military Women’s Memorial. The exhibits are complemented by artifacts from the MWM’s collection of documents, photos, objects, textiles, and audiovisual materials. Though the MWM is temporarily closed for renovations until late May of 2022, individuals can experience The Color of Freedom exhibit virtually HERE.

Virginia Tech’s Newman Library will be the first of several AppreSHEation Tour stops in Virginia all sponsored by Virginia Humanities. The traveling exhibit will also include stops in cities like San Diego and San Antonio with the support of Amazon Global Military Affairs, Iron Mountain, and other local tour partners such as Booz Allen Hamilton.