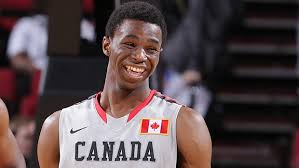 The NBA’s first overall draft pick Andrew Wiggins visited his home town of Toronto, Canada yesterday.  Wiggins was in town shooting a commercial on his old elementary schools basketball court.  Wiggins did a few interviews for the Canadian media outlets and encouraged fans to stick to their vision.

Wiggins who was drafted first overall by the Cleveland Cavillers has been the center of trade talks with reports that the rookie will be traded to the Minnesota Timberwolves with Toronto native, teammate and last years first overall draft pick Anthony Bennett.  The deal has not been made official yet because of a league clause that states that a rookie cannot be traded until 30 days after his original signing.