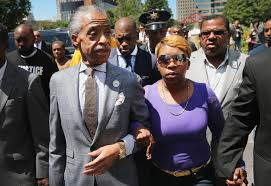 Thousands of people took to the streets to protest the death of an unarmed black man by the hands of a NYC police officer. The protest was led by community activist Rev. Al Sharpton and the family of the victim.

Eric Garner died July 17 after a New York City police officer took him to the ground with a banned tactic in a confrontation captured on video.

Police estimated at least 2,500 people had taken to the streets. The crowd included representatives of the United Federation of Teachers and members of the Society of Friends, also known as Quakers. City Council Speaker Melissa Mark-Viverito and Democratic gubernatorial candidate Zephyr Teachout marched, too.

Sharpton has repeatedly called Garner’s death and the shooting death of the 18-year-old Brown by police in Ferguson, Missouri _ a “defining moment” for policing nationwide.

Garner’s death was ruled a homicide. Two NYPD officers have been reassigned during the investigation