Brazil to grant permanent residence to 43,000 Haitians in bid to undermine human traffickers 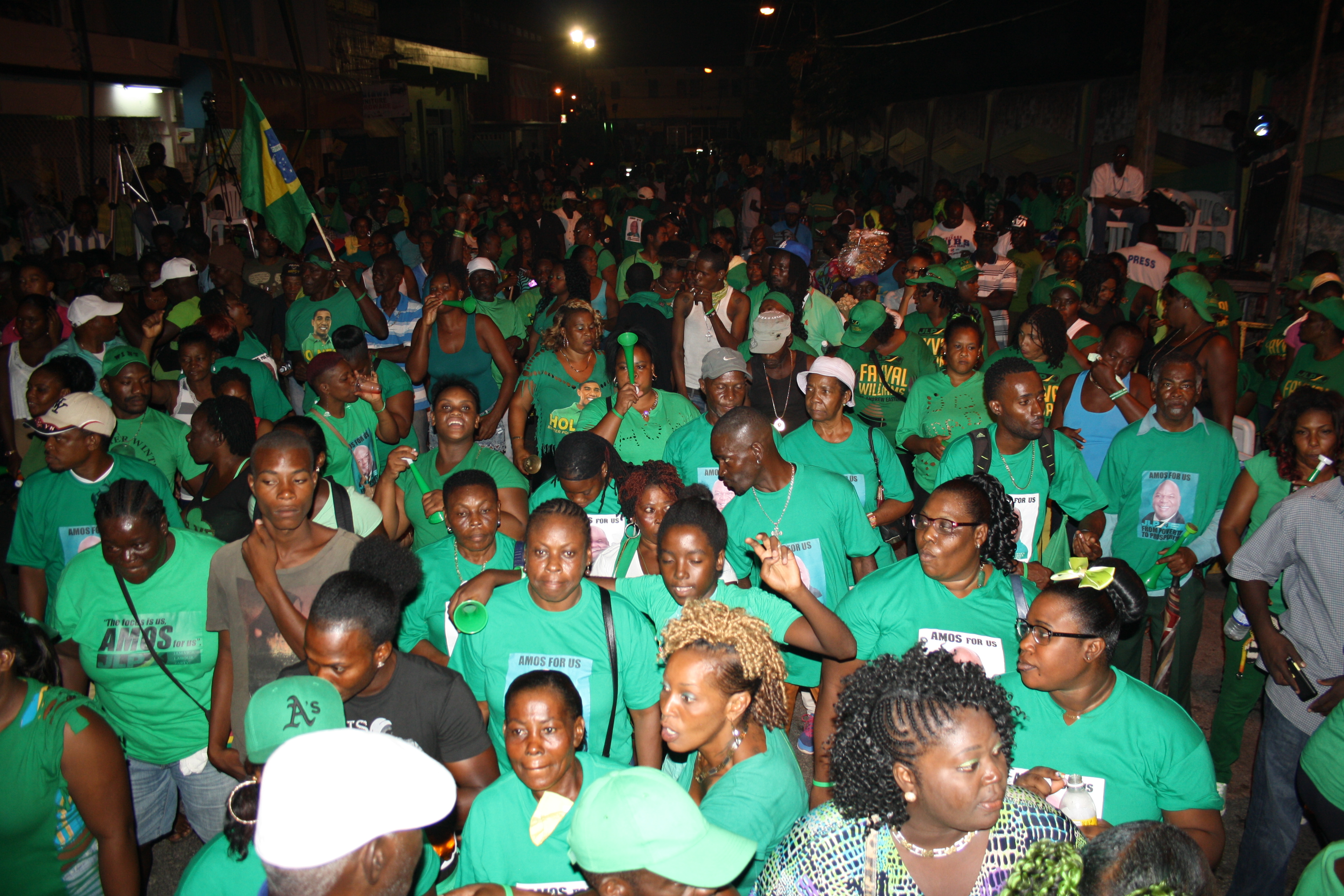 The old Spanish capital of Jamaica, founded 1534 was transformed into a sea of green as an estimated crowd of some (25, 000) green clad Labourites, waving flags and ringing bells, blowing horns with gyrating music belting party favourites adding to the carnival type atmosphere in Munimar Square, Central St. Catherine, 13 Kilometres west of Kingston the Capital city, Jamaica, W. I.

The massive yet disciple crowd was in an upbeat mood as talk of General Elections constitutionally due 2016. With declining popular support and repeated scandals, PM Portia Simpson Miller is virtually under siege by civil society …. 19 babies killed/died in State care is the last straw.

A number of speakers brought brief greetings cataloguing the many ills facing the Jamaican society since the PNP regained state power December 2012. They were the supporting casts as they await the triumphant entry of Party Leader & former PM Andrew Michael Holness, 43 years old.

The Jamaican dollar moved from J$86 to J$126 for one US$ declared Matthew Samuda, President G2k.

Keith Blake, the one JLP MP standing into Portmore, St . Catherine east declared that he planned to increase the number of seats held by the JLP.

Candidate Alando Terrelonge, East Central St Catherine declared “… we gonna chaste the crazy PNP out of town …kick them out on Election Day.”

Candidate Newton Amos, North West St. Catherine said “tell Pickersgill, I will put him into retirement, you can count on me for that seat.”

Pearnel Charles, MP, Clarendon North said “I have a short message for you ….this is the worse PNP government in the last 26 years …. they have been in for 22 years. One mosquito bite 1.5 million people get infected. We had the worse Riverton fire …a plague is on this land under this government … they call us John Crow, dutty labourite … when them come to your gate run them …. them know say mi a rock stone labourite. The plague will leave us one and a half years before its time. If a no baby, a rat mice then (in obvious reference to a statement made by discarded Health Minister Dr Fenton Ferguson that the premature babies were ‘not babies in the real sense’). ….55000 graduated last year, just 10000 got jobs …middle class being destroyed under this government.. Take up of the cross and follow us. God has given us a task …Andrew born 9 years after I join JLP. God has given us another chance”.

Campaign Manager, Mike Henry took to the stage and declared ” I greet you in the name of Jah. Dec 10, I announce it already (in reference to the election date). The PNP has failed you. We will bring you from poverty to prosperity. Poor black lives do matter…. Portia parading on the road we started, Her Jeep can’t start …we make the train run again …. time is short. I man know what Pinnacle (first Rastafarian Village) is”, (in reference to the Rastafarians demands for their own piece of land and reparation to Africa). “…how could Patterson stay there so long and not make us able to fly directly to Africa. Many rivers to cross, we will take back gov from PNP on December 15.

Ninga, a performer, took to the stage and performed “Roll Call” (this song has almost become the anthem for the JLP campaign).

Olivia “Babsy” Grange, MP, St Catherine Central said “Me know what a baby is to carry…. the death of 19 babies could not happen under our watch …. never again will that happen again. When we return to power we will make it up to you. Those babies were real. We step aside for investigation to take place …Mike Henry started Jamaica Development Infrastructure Programme (JADIP)…them call it JEEP (Jamaica Emergency Employment Programme). Them no have no principles. Mike Henry stepped aside and was vindicated.”

Shaw, Audley…”Them run the place for 22 out of 26 years yet Poverty reins supreme” …. declared former Finance Minister Audley Shaw, MP. …as he made his contribution to a JLP mass rally on November 8.. “Laborite river come down bank to bank”.

“Don’t draw my tongue…. Shaw declared “I took my wife abroad ….. baby born 1lb 4 ozs. doctor in Jamaica planned to abort baby ….took wife abroad ….my wife stayed on her back for 3 and a half weeks …. they gave her steroids and water to put back lost fluid. Tell them no draw mi tongue.”

“Tell mi why a senior Cabinet Minister had their baby abroad… is to get citiczenship abroad or them saw the Audit report? We set our priorities which will be road, water …education and healthcare. CALL IT CALL IT …GOD BLESS YOU, I LOVE YOU.”

Andrew Holness on stage …”I am from about here …grew up in Ensom City and went to St. Catherine High School …with my mother being a civil servant and my father a farmer. I was a normal boy, hunted wild fruits and got an occasional dip in Rio Cobre river. One day I nearly drown …. as me no fish (being a “fish” colloquial reference to being “gay” or homosexual. … to thunderous and prolonged applause as Jamaicans are believed to be defiantly homophobic).

Free education and litaracy … .H1N1 came and there was no outbreak … as you can see ni naw speak from no paper….” (got on the platform and did 6 push ups). To thunderous and prolonged applause ….

“They are liars, and hypocrites, they have increased school fees …increase it and call it auxiliary fees… we will lift you from poverty to prosperity”. (sustained applause)

On the vexed issue of Crime Holness had harsh criticiems for his detractors.

“When the PNP is in power, crime increases. In 2010 there was a significant dent in crime … I met with then Opposition Spokesman on National Security Peter Bunting and wanted to get his co-operation on extending the then State of Emergency … as we did not have the votes in the House to do so alone. He said no. Bunting took a POLITICAL decision which has costed us dearly. … I refer to an article written by CNN ….they named the late PNP executive member and activist “bebe” his alias as the reputed Godfather of lottery scamming. I want you to know … to kill the lies. National Security Peter Bunting PNP referred to the spike in crime as a”Bump in the road”, one year old, baby and his father are killed. Last week a 22 year old medical technologist student is killed walking home from university.”

“The intellectual elites are hypocrites. I commit to you, that I will take your security seriously, respect you …we will create real employment, not two days of temporary work that takes thee weeks for you to get paid.”

“The next JLP Government will set up an Apprenticeship scheme …students will be used to digitize medical records as we move away from paper-based record keeling …..universal accessibility of records. For example, if you are in Kingston and need to access medical services in say Montego Bay, a doctor can access your records and be able to peruse your medical history.”

“Make business environment more efficient. Safe and secure environment …I will be a growth czar. Fast track investment and jobs and grow the economy.”