Traditional Education Must be Joined With TVET – Minister 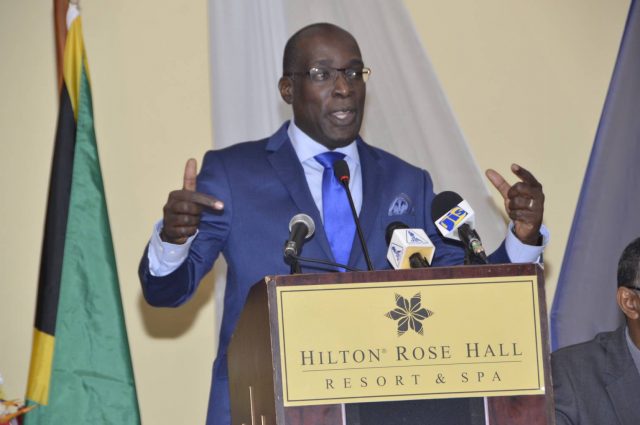 Photo: Minister of Education, Youth and Information, Senator the Hon. Ruel Reid, addresses the 3rd International Conference on TVET in the Caribbean on May 10 at the Hilton Spa and Resort, St. James, under the theme ‘TVET for Sustainable Regional Development’.

Senator Reid, who was addressing the 3rd International Conference on TVET in the Caribbean on May 10, at the Hilton Spa and Resort, St. James, said the Task Force report on education in 2004 had inadvertently “missed the mark” in the reconfiguration of the education system as part of the prescription of its transformation and had left out the convergence with TVET.

“We have to now go back and fix that. So, within the context of the discussions we have been having in this regard, I want to formally announce the full marriage of what we know as traditional education and TVET.  They have now been joined together in ‘holy matrimony’ within the education system,” the Minister said.

Senator Reid added that to ensure that there is no ambiguity and that there is clarity in terms of its integration and understanding, the Ministry has moved ahead and launched, back in February, the National Qualification Framework of Jamaica.

The Minister said he is putting on notice the University of the West Indies and all other tertiary institutions to be aware of the new framework, noting that it will be a national standard to which they will all have to adhere.

“This became necessary so that we could bridge the gap between our understanding of the relevance and comparability of qualification and certification and what we are accustomed to as traditional certification and technical vocational qualification. So, you can look at the framework and you will know exactly where you fall on the spectrum,” Senator Reid added.

The Minister said the focus should now be on creating a track for what is now called occupational degrees and which is separate from traditional degrees, or “what some people call transfer degrees or straight vocational qualifications”.

“In addition, the matriculation and articulation requirements of the national qualification framework allow persons to get credits for courses done, whether through apprenticeship or in the formal system, or even on-the-job experience,” Senator Reid pointed out.

He said the national qualification framework levels the playing field by neutralising all qualifications, so multiple pathways and multiple assessments will allow persons to be qualified by age 30.

“We have a mantra now to move all our youth through a seamless education system where students beyond Grade 11 are allowed to specialise,” the Minister noted.