Trodding Through This Life, Omari Banks Says Life Is About Seeing Things Half Full or Half Empty

MPR Consulting – From prestigious Forbes magazine to Huffington post, BET to NY Times, former professional athlete, now renowned guitarist, singer-songwriter Omari Bank’s charm, musical delivery, versatile lyrics ranging from consciousness to sensuality and memorable performances have all been recognized and praised internationally. “At six foot five, dark and handsome, with long dreadlocks and a cool Caribbean style, you can’t help but be drawn to Omari Banks, His music is dynamic and has many influences.” –  Huffington Post 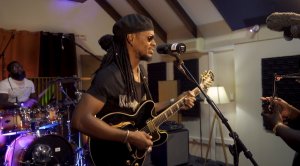 His distinctive style blending rock, reggae and blues, have given Omari a unique panache and amassed the soulful troubadour a legion of dedicated fans worldwide. The latter self evident as Omari who in 2018 made headlines by introducing Reggae Summertime with a tour in India, is now slated for the St.Kitts Music Festival alongside Buju Banton, French Montana and Smokey Robinson to name a few. “Omari Banks, who commanded the stage with a Jimi Hendrix-rejminiscent presence. Rocking a multicolored “Rolling Stones” cut-off tee, a bandana, leather pants and his signature dreads, Omari showed,  that “He did not come to play — He came to slay.” – BET

Already boasting an impressive discography, Omari is adding one more to the list with his upcoming “Half Way or Half Empty” single. The meaningful track features such notable musicians as Micheal Fletcher, Ottmar Campbell, and Shaun Dawson. Recorded in Jamaica at Tads recording, with some vocals and over dubs done in Anguilla at Ama (Anguilla music Academy), “Half Way or Half Empty” was mixed and engineered by Stephen Stanley.

“The song Half full or Half empty is about our perspective on life and our experiences and how we interpret them, its about having a optimistic view of whatever situation we  are faced with and be grateful for the now.” Explained Omari. “Just observing life and seeing how two people can have the same experiences and  have a completely different outlook as well as realizing that some people prefer to look outside themselves to place the blame of their instead of changing the mindset that is limiting them.” 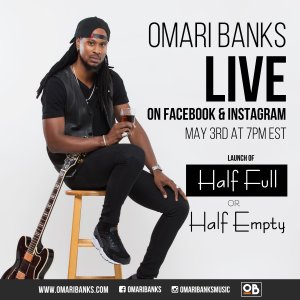 To honor the release of his new single, and as fans of Omari permeate every continent, armed with his guitar from Anguilla, the crooner will give a live social media performance on May 3rd, 2019, “Half Full or Half Empty” release date. The aforementioned is in addition to a documentary to be released Thursday April 25th, giving insight into the making of the single and video (coming soon)

“Half full or half empty Everyday, we got to live and count we blessings.. dem would grudge you for being Hardworking Dem even grudge me for me face, wah me mummy and mi daddy give But me nah study bout dem for long We keep the message positive The youth we give them inspiration I know one’s who’s going to help me For those I care The other I can’t see”

Distributed by 21st Hapilos Digital, pre-order “Half Full or Half Empty” at http://smarturl.it/omaribanks-half