Tropical Depression Grace, which became the 7th named storm of the 2021 Atlantic Hurricane Season while approaching the Lesser Antilles and later weakened south of Puerto Rico, is currently south of the Dominican Republic and forecast to move closer to Jamaican today. 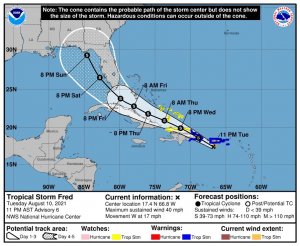 At 4:00 a.m. the center of Tropical Depression Grace was located near Latitude 17.4 degrees North Longitude 70.2 degrees West, or about 640 kilometers (400 miles) east of Morant Point, Jamaica. This is also 260 kilometers (160 miles) cast-southeast of Port-au-Prince, Haiti.

Grace is moving towards the west near 24km/h (15 mph) and a west to west-southwest motion is expected over the next few days.

Maximum sustained winds are 55 km/h (35 mph), with higher gusts and little change in strength is forecast during the next 24-36 hours.

Over the past 12 hours, forecast models have been making adjustments and predicting the path of Tropical Depression Grace to be closer to the northern side of Jamaica than originally expected. The system could also regain tropical storm strength if it avoids the mountainous terrain of Haiti later today. The latest forecast track, therefore, puts the center of Tropical Depression Grace between Haiti and Jamaica on Tuesday morning and then between Jamaica and Cube by Tuesday afternoon.

Rainfall associated with the tropical depression is expected to begin affecting, Jamaica from late tonight, continue through the day on Tuesday as Grace passes north of the island. Strong gusty winds will also be experienced, primarily over northern parishes during showers and thunderstorms. Sea conditions associated with the tropical storm will gradually deteriorate over the next 24-36 hours, especially east and north of the island.

The Meteorological Service continues to monitor progress of this system, and all interests must pay special attention to further releases.  The next Bulleting on Tropical Depression Grace will be issued at 8:00 a.m. today.