‘It’s hard to see him go’: As Kobe starts his farewell, the NBA begins paying tribute

Trump meets with black pastors at ‘amazing meeting,’ but says no change in tone forthcoming 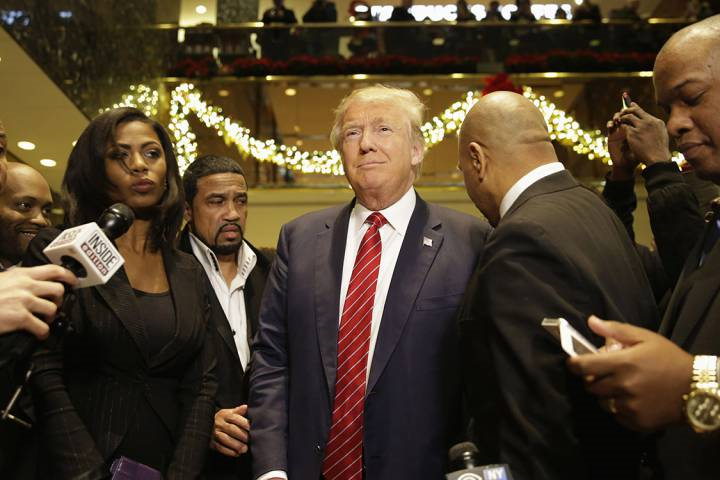 NEW YORK _ Dozens of black pastors pressed Republican presidential front-runner Donald Trump on Monday to address what some called his use of racially charged rhetoric, with several describing a meeting that became tense at times as attendees raised concerns about his blunt language.

While some left the gathering at Trump’s skyscraper in midtown Manhattan with hopes their message had resonated, Trump said afterward he had no plans to change his approach, which he said had taken him to “first position in every single poll.”

But several pastors who met with the billionaire real estate mogul and reality TV star, who has held a consistent lead in preference polls of Republican voters for several months due in large part to his aggressive style of campaigning, told a different story.

Trump said after the incident, “Maybe he should have been roughed up because it was absolutely disgusting what he was doing.”

“I asked him: ‘Are you a racist? People are saying that about you,”’ Bloomer said. “If you are seeking the African-American community to support you, at the least, you’re not helping with these kind of things that are going on.”

Bloomer said he told Trump that “if he wants to have our ear as a community, to at least tone down the rhetoric some kind of way, tone it down. And he said that he would.”

Trump is seeking to replace President Barack Obama, who won two terms in the White House by bringing together a coalition of young people, single women and black and Hispanic voters.

Democrats maintain an enormous edge with African-American voters, with Republican presidential candidates faring poorly among minorities in the past two elections.

But Trump has been courting the support of evangelical black clergy members and other African-American leaders as he works to broaden his appeal in a crowded Republican field.

Monday’s meeting with the pastors was originally promoted by the campaign as an endorsement event, in which he would receive the backing of 100 black evangelical and religious leaders.

But many of those invited to the meet-and-greet objected to that description, saying they accepted the invitation only because they wanted to challenge Trump about what he’s said as a candidate.

Trump kicked off his campaign with a speech in which he said some Mexican immigrants are rapists and criminals, and recently drew criticism for retweeting an image of inaccurate statistics that vastly overrepresented the number of whites killed by blacks, among other errors.

In a letter published by Ebony magazine, more than 100 black religious leaders wrote that “Trump’s racially inaccurate, insensitive and incendiary rhetoric should give those charged with the care of the spirits and souls of black people great pause.”

They also expressed concern that Monday’s gathering would “give Trump the appearance of legitimacy among those who follow your leadership and respect your position as clergy.”

Pastor Victor Couzens said he nonetheless felt an obligation to hear what Trump had to say.

“It’s very unfortunate the way he has talked to not just the African-American community, but things he’s said about women and Mexicans and Muslims,” Couzens said. “But what’s more discouraging than the things that he has said is the fact that in the face of him saying all of these things, he continues to surge in the polls.”

And some attendees emerged expressing full-throated support for Trump.

“What we were able to do today was allow people to see his heart for themselves and to make up their own minds about him,” said Darrell Scott, who helped to organize the meeting. “They find out that he’s not the person that the media has depicted him to be.”