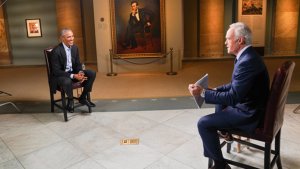 An in-depth Interview by Obama

The refusal of Donald J. Trump the 45 Th president of the USA to graciously concede after losing to Biden in 2020 is disgraceful to say the least. History will not be kind to Trump. Not at all.

The 44 TH President of the USA Barak Obama has blasted Trump for not conceding.  Obama was speaking his mind on 60 minutes. He was not holding back anything.  Obama is a normally a most diplomatic person, so for him to hit out so publicly is a departure from his normal conduct.  Obama is not going to keep quiet as a result of such distasteful, despicable, disgraceful and demeaning conduct. Shame on you Donald Trump. Former President Obama 44, was not amused.

Trump should have done what outgoing president Obama did in 2016 and concede early. This gave Trump a jump start. Statesmanship is not bought at a supermarket.

Shameful conduct by Trump. To date he has not conceded. Why?

We all just need to do the right thing.  Obama told 60 minutes how he felt deep down. He was obviously deeply hurt by Trump’s behaviour.  Trump brought the Office Of the Presidency into disrepute.  This in my view, is what Obama was saying. That is how true leaders must speak out without fear or favour. Congrats to Obama. Proud of you Sir!  Systematic racism seem to have spread like a California wildfire under Trump’s leadership. This was a most dangerous development. People of colour were greatly affected. George Floyd was one such victim who was murdered by 3 alleged plotting racist cops. They have been criminally charged for varying levels of murder.  They have pleaded not guilty.

Hopeton O’Connor-Dennie is a veteran journalist who has a keen interest in decency in public life. He has international exposure.