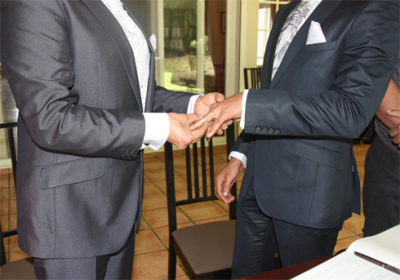 SANTO DOMINGO, Dominican Republic _ Same-sex marriage is banned in the Dominican Republic, but a man and his partner have exchanged vows in the first ceremony of its kind performed at the British embassy in the conservative Caribbean country.

The embassy tweeted on Tuesday that the Dominican government respected its right to perform the ceremony under the Vienna Convention and that the British government has recognized the marriage.

Embassy officials said they have advised the Ministry of Foreign Affairs that additional ceremonies would be performed.

The couple was not identified, with the embassy saying only that it is a Dominican and a British man. Embassy officials tweeted a picture of the ceremony that showed only the hands of one man placing a wedding ring on the other.

The United Kingdom announced in June that same-sex couple could marry at British consulates in 25 countries, including the Dominican Republic. It is the only Caribbean country on that list.

The U.K. parliament approved same-sex marriages in July 2013, and the law went into effect March of this year.