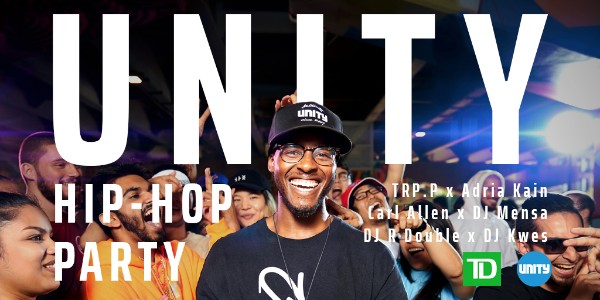 The Unity Hip Hop Charity Party is back Thursday, January 18, 2018 at Revival Bar for a night of incredible party vibes, masterful music and epic talent. This annual event raises funds for Unity Charity, which uses hip hop to improve young people’s lives creating healthier communities. Not a typical charity event – no circle tables, or fancy dinner –  it is a unique opportunity to come to an amazing party and support an important, high impact cause. The Unity Hip Hop Charity Party will raise money for Unity‘s underfunded programs with an evening of beatboxing, MC/Spoken word, and breakdancing battles. Live performances will include Adria Kain, a tremendous singer/songwriter, and TRP.P, a producer/singer collaboration featuring TRussand pHoenix Pagliacci. Legendary DJs Carl Allen and DJ Mensa will spin back-to-back taking the audience on a journey through hip hop history, plus appearances by DJ R Double, 2016 DMC Canadian National Finalist, and DJ Kwes, hosting a How to Scratch Lab. Rounding out the night is several chances to win amazing prizes including Pizza for a Year, and tickets from Raptors 905, Toronto Blue Jays, Art Gallery of Ontario, escape rooms, movies and paintball! In October 2017, Michael Prosserman, the founder of Unity, made the decision to step down from his role as Executive Director of Unity Charity. The Unity Hip Hop Charity Party will also act as a celebration of his accomplishments at Unity. “Sometimes founders of organizations leave when things aren’t going well. I decided to do the complete opposite. Unity has never been stronger,” said Michael Prosserman. “Our impact is growing, our staff, board of directors and volunteers are rock solid, our partnerships are deep and diversified, our artists are super heroes, our evaluations are robust, and our funders are engaged. If there ever was a good time for me to move on and plant my feet somewhere else, now is that time. We also have a clear co-created vision, strategy and theory of change as the organization’s foundation and compass moving forward.“ Unity Charity uses hip hop to improve young people’s lives, creating healthier communities. Unity engages and inspires youth (ages 12-24) from priority and underserved communities across Canada. With an emphasis on improving mental health and well-being through the arts and Hip Hop, we look to build resilience to physical and psychological stressors. All Unity programs are offered for free in schools and community spaces for youth living in underserved communities.