Minister McKenzie Commends Gains In Combating Dengue In The West

More than 7,000 residents in and around Watermount in St. Catherine should have adequate potable water in the next eight months from a $150-million upgraded system in the area. 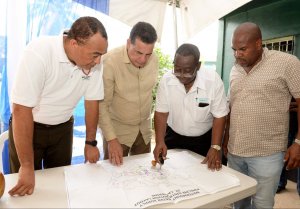 Member of Parliament for West Central St. Catherine, Dr. the Hon. Christopher Tufton (left), views the design for the $150-million Watermount Water Supply System, at a ceremony to break ground for the project on February 19, in the St. Catherine community. Also viewing the plan are (from left): Chairman of the Rural Water Supply Limited (RWSL), Councillor Homer Davis; Managing Director of the agency, Audley Thompson, and Engineer with the agency, Opal Gillins.

The Watermount Water Supply System, which is being developed by the Rural Water Supply Limited (RWSL), will be turned over to the St. Catherine Municipal Corporation on completion, to serve some seven communities in the area.

Welcoming the development, Member of Parliament for West Central St. Catherine, Dr. Christopher Tufton, said it came out of many collaborations and advocacy that he led.

“The work is ready to begin, and the resources are in place. Be responsible in accommodating the project, and be responsible in the usage of the infrastructure,” Dr. Tufton, who is also Minister of Health and Wellness, said at yesterday’s (February 19), ground-breaking ceremony in Watermount.

Water will be sourced from the William Gully Dam, which was earlier refurbished by the Municipal Corporation, with new transmission and distribution lines installed, and construction of a storage tank and pump station.

Mayor of Spanish Town, Councillor Norman Scott, told the residents that the system is coming at considerable cost, and persons will not be allowed to divert water illegally. “Protect the investment; it is taxpayers’ money,” the Mayor said.

In his address, Chairman of the RWSL, Councillor Homer Davis, said with an increased budget to the agency, they are reaching scores of communities with improved water systems, and the one in Watermount will “add value to the residents” in the areas to be served.

He also reported that work to upgrade the Connor/Ginger Ridge water supply system is slated for completion by April, and that 26 water supply projects across the island are nearing completion.