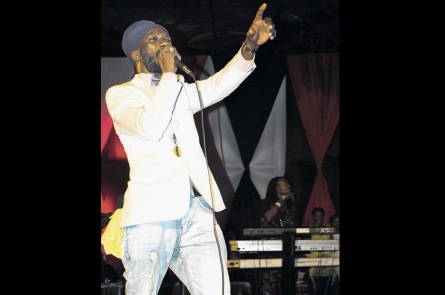 AFTER much anticipation for Sizzla’s return to performing in the United States, his tour of that country has hit a roadblock.

The Rastafarian artiste has been denied a visa to that country, according to Stephen Brush of International Artists Agency, who spearheaded bookings for the tour.

He said, based on the outcome of the meetings, he has no choice but to reschedule the tour for early next year.

“I am deeply saddened by the news, and I can say this is one of the worst weeks in my career… It is not a dead issue, but I am no longer comfortable waiting and seeing. What I would like to do is postpone the tour and look at re-booking it for February and March,” he said.

The seven-date gig was scheduled from November 21 to December 22. Sizzla would have performed at venues in Washington, DC; Virginia; Colorado; and New York.

Sizzla, whose real name is Miguel Collins, has not held a US visa or work permit since 2008 when it was revoked.

Several of Sizzla’s songs such as Bad Man Don’t Apologise and Murder Dem have portrayed violence towards members of the homosexual community, who have protested his presence in Europe and North America.

In 2007, his concerts in Toronto and Montreal were cancelled after protests by members of the Canadian Stop Murder Music coalition. One year later, he was sent back to the US after arriving in Madrid, Spain, for a concert. Spanish human rights organisations objected against his “hatred against homosexuals”.

For the original report go to http://www.jamaicaobserver.com/entertainment/US-bars-Sizzla_15463812